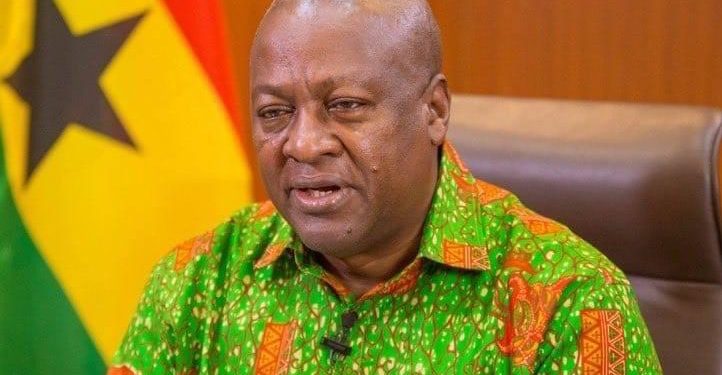 The flagbearer of the opposition National Democratic Congress (NDC), John Dramani Mahama has accused the Akufo-Addo government of allocating about 50% of the COVID-19 relief fund to supporters of the governing New Patriotic Party (NPP).

The government set aside an amount of GH¢600 million to be disbursed in the form of loans to small-scale businesses to cushion them from the adverse economic impact brought on the country by the Coronavirus pandemic.

It is being managed by the National Board for Small Scale Industries (NBSSI).

While speaking at a durbar of chiefs and people of Abesewa in the Ashanti Region on Tuesday, November 10, 2020, Mr. Mahama alleged that part of the money has been apportioned to members of the NPP.

He insisted that the government is using the money to lure electorates into voting for President Akufo-Addo in the upcoming December 7 polls.

“We have something called the Stabilization Fund which I kept funds in when I was President to help cushion the nation should any unforeseen circumstance befall the nation. I left about $300 million in it before leaving office. So when the COVID-19 pandemic hit the country, we suggested that government should use money that had accrued in the stabilization fund to buy PPE and other protective materials as well as support health personnel.”

“Lo and behold, the Akufo-Addo government heeded to our advice and withdrew about GHS1.2 billion from it but GHS600 million of the said amount was to be disbursed as loans to small and medium scale enterprises. But this government has given about 50 percent of the amount to their party members and used the rest to lure voters to vote for President Akufo-Addo.”

Mahama had earlier promised that when he is voted into power, he will not retrieve the loan from the beneficiaries.

President Nana Addo Dankwa Akufo-Addo, on April 5, announced a soft loan scheme of up to GH¢600 million for small and medium scale enterprises (SMEs), which would sustain the country’s affected industries and address the disruption in economic activities caused by the COVID-19 pandemic.

Prior to this, he had announced a GHS1 billion stimulus package to households and businesses, particularly SMEs, under a Coronavirus Alleviation Programme.

On Friday, March 27, 2020, in a televised address on enhanced measures to contain the COVID-19 pandemic, Akufo-Addo said the Alleviation Programme was to address the disruption in economic activities, the hardship of the people, and to rescue and revitalize the industries.

The National Board for Small Scale Industries was thus given the mandate to disburse the stimulus package to SMEs affected by the pandemic.

Another lockdown imminent over disregard for COVID-19 preventive measures – GMA

Another lockdown imminent over disregard for COVID-19 preventive measures - GMA