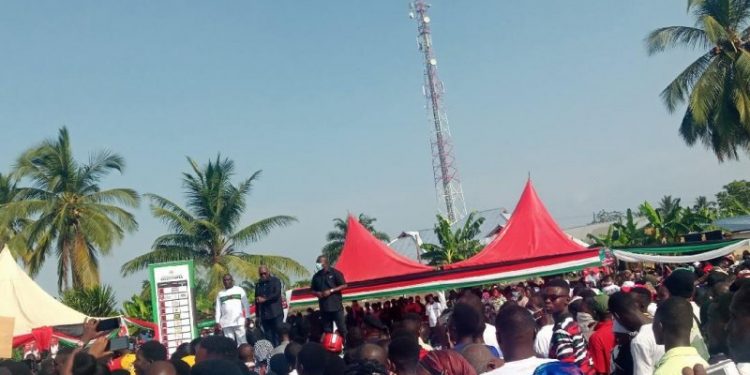 Mr. John Dramani Mahama, the Presidential Candidate of the opposition National Democratic Congress (NDC), says his next administration would acquire 10,000 to 20,000 hectares of grazing land and move all herdsmen and their cattle there.

According to him, this is part of efforts to resolve the frequent clashes between herdsmen and local crop farmers in the Agogo area.

He said this would ensure that local crop farmers had peace to do their farming work.

Mr Mahama made the promise at a mini-rally at Agogo in the Asante Akyem North Constituency of the Ashanti Region.

He maintained his government would also ensure that the cattle grazing land had water for the livestock.

Prior to addressing the mini rally in Agogo, the Presidential Candidate paid a courtesy call on Nana Kwame Akuoku Sarpong, the Agogomanhene at his Palace in Agogo.

At each constituency, Mr Mahama appealed to Ghanaians to vote the NDC back to power to continue with its good works.

At New Edubease, he assured the chiefs and people of New Edubiase and Adansi Dampoaseman that his next administration would continue all the projects he started in the area during his first term namely the senior high school (SHS) e-block project, the New Edubease Sports Stadium, the New Edubease – Tonkwase road and rural electrification, which had been abandoned by the current government.

With regard to farmers, he said his next administration would supply free fertilizers to cocoa farmers, as part efforts to boost cocoa production in the country.

He assured the people of Fumso that, the next NDC government would build an ultramodern market for them, since the town was a market centre.

At Issakora, the Presidential Candidate said his next Government would establish a Farm Mechanization Centre in the Sekyere Afraim Plains to cater for the needs of farmers.

He also promised them an ultramodern district hospital to meet the health needs of the people.

At Effiduase Mr Mahama said his next administration would maintain and improve upon the free senior school programme, adding that the double-track system would be eliminated within one year.

At Ejisu, Mr Mahama, who said his next Government would build an ultramodern market for them, also assured them of the dualization of the Accra-Kumasi highway to passes through Ejusi, to enhance the free flow of traffic and the fast movement of goods and people.

He said they would also address the water problem in Ejusi.

It would be recalled that on Thursday, November 12, Mr Mahama had to suspend his six-day campaign tour of the Ashanti following the demise of former President Jerry John Rawlings, the founder of the NDC.