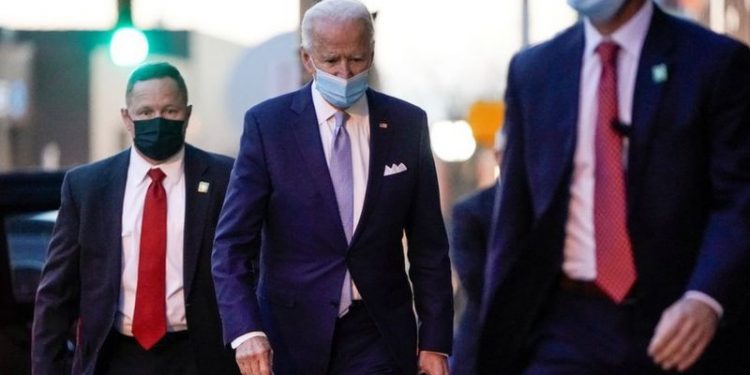 US President-elect Joe Biden has said outreach from the White House over the transition has been “sincere”.

“It has not been begrudging so far, and I don’t expect it to be,” he told NBC News in an interview.

He spoke as he unveiled his choice of top officials for when he takes over from Donald Trump in January.

Yet he still refuses to admit defeat, repeating unsubstantiated claims that the 3 November vote was “rigged”.

What did Biden say exactly?

Speaking to NBC’s Nightly News, he confirmed he had not yet spoken to the president but added that he did not expect the beginning of his term to be affected by the delay in beginning the transition.

“It’s a slow start but it’s starting and there are two months left to go, so I’m feeling good about the ability to be able to get up to speed,” he said.

There were, he said, plans for him to meet the Covid-19 task force in the White House about vaccine distribution and access.

As well as getting the Presidential Daily Brief – an update on international threats and developments – Mr Biden can now access key government officials and millions of dollars in funds as he prepares to take over on 20 January.

Barack Obama’s former vice-president said that his time in office would not be a “third Obama term” because “we face a totally different world than we faced in the Obama-Biden administration”.

“America is back” and “ready to lead the world, not retreat from it”, he said when he introduced his future team.

He also told reporters he had discussed the Irish border issue with UK Prime Minister Boris Johnson and other leaders.

Mr Biden, who has Irish heritage, said he was against a guarded border, arguing it must be kept open: “The idea of having the border north and south once again being closed, it’s just not right.”