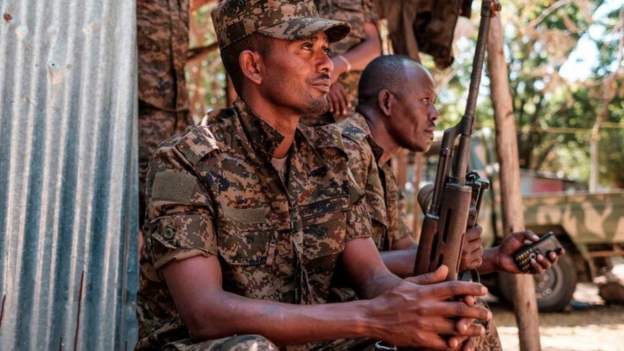 The Tigray People’s Liberation Front (TPLF) politicians in Ethiopia’s Tigray region say they have released more than 4,000 soldiers who had been held captive.

The officials said they had been part of the army’s northern command but were detained when Tigrayan troops attacked a federal military base.

Earlier on Monday Ethiopia’s prime minister declared that the military had won the conflict but TPLF politicians said they are fighting on.

Before the war started, the military had troops in the north of Ethiopia who were from different regions of the country. But when Tigrayan fighters suddenly attacked the main base triggering the war, thousands of non-Tigrayans suddenly found themselves in what was enemy territory.

They were detained by the TPLF but have now been freed. State media in the capital Addis Ababa confirmed that at least 3,000 soldiers had been released. It reported that some were Tigrayans who had refused to fight – a statement the TPLF is likely to dismiss as propaganda.

Meanwhile, Ethiopia’s Human Rights Commission says it is gravely concerned about cases of Tigrayan people being subjected to ethnic profiling as a result of the war. It has also urged the government to restore telecommunication links to the region.