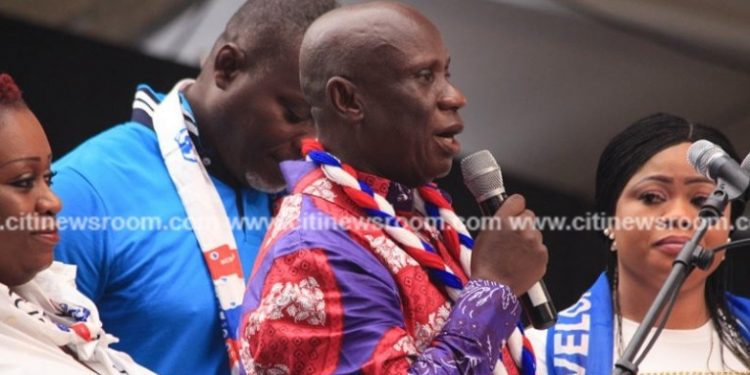 A Deputy General Secretary of the New Patriotic Party (NPP), Nana Obiri Boahene says any attempt by the National Democratic Congress (NDC) to stop the swearing-in of John Peter Amewu as MP-elect for Hohoe will not succeed.

A High Court in Ho on Wednesday, December 23, 2020, granted an interim injunction restraining the Electoral Commission (EC) from gazetting the parliamentary election results which indicated that the NPP’s John Peter Amewu had become the Member of Parliament for the constituency.

This was after an ex-parte application was argued in court by Tsatsu Tsikata on behalf of applicants who hail from Santrokofi Akpafu Likpe and Lolobi, towns that were prevented from voting in the parliamentary elections of December 7, 2020, under the Hohoe constituency as was constituted under CI 95.

But speaking to Citi News, Nana Obiri Boahene said the move is just an attempt to frustrate the process of swearing Mr. Amewu into office.

“They are joking. They can just create an imaginary situation. I do not want to run an extensive commentary on that but as a lawyer, I am not the least worried about what is happening at all. All attempts to prevent the swearing-in will fail.”

At the just-ended general election, the EC could not hold elections for registered voters in the Guan District to elect a Member of Parliament due to the absence of a constituency.

A source at the EC said the Commission was unable to create the constituency because the C.I. needed to create a constituency could not mature in the 7th Parliament.

The EC noted that the Supreme Court had ruled on when elections could be held in a newly created Constituency.

“It was not a deliberate attempt by the EC to deny the people of representation in Parliament. They could not have voted to elect an MP because it was not legally right for an MP to be voted for by two different districts,” the source said.

“By law, if a new constituency is created they have to join the new parliament, and whether the people will have a representation or not in the 8th Parliament, it will be another hurdle. As a Commission, we will do our part and leave the rest to the judicial process”.

Mr. Amewu won the seat with 26,952 votes in his third attempt at becoming the parliamentary representative for Hohoe while his National Democratic Congress (NDC) opponent, Margaret Kweku, polled 21,821 votes.

Coronavirus: CHASS demands provision of PPE ahead of school reopening

Coronavirus: CHASS demands provision of PPE ahead of school reopening