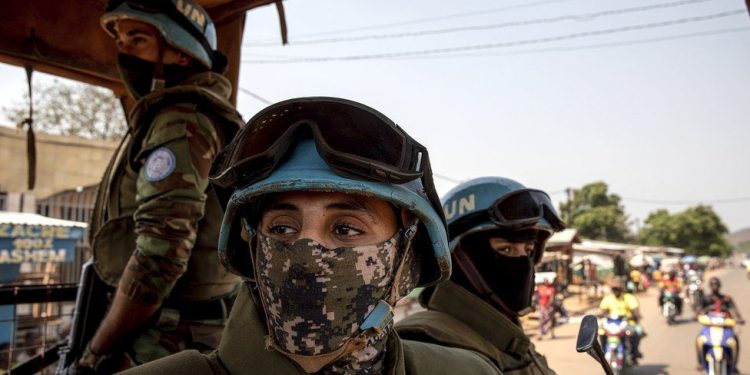 Three UN peacekeepers have been killed in the Central African Republic (CAR) as tensions flare between government and rebel forces.

The group was stationed in CAR to quell violence ahead of presidential and parliamentary elections on Sunday.

Mr. Bozizé, who is barred from running in the election and is under UN sanctions, has denied the allegation.

The government has also denied allegations of election rigging by the Coalition of Patriots for Change (CPC) – an alliance of the country’s most powerful rebel groups.

In a statement on Friday, the UN said the three deceased peacekeepers were from Burundi, and their deaths may constitute a war crime.

The assaults against them took place in Dekoa, central CAR, and in the southern area of Bakouma.

The UN said 55,000 people had fled their homes in CAR as violence escalates, and there has been an increase in attacks on humanitarian groups operating in the country.

The CPC said on Friday that it had called off a three-day ceasefire due to attacks by government forces.

CAR’s government dismissed the ceasefire, calling it “a non-event” that had not been honoured by rebels.

Rebel groups have seized several towns close to the capital, Bangui, clashing with government forces and looting property, and the UN said its troops were working to prevent a blockade.

On 3 December the Constitutional Court ruled that Mr Bozizé did not satisfy the “good morality” requirement for candidates because of an international warrant and UN sanctions against him for alleged assassinations, torture, and other crimes during his rule.

Mr. Bozizé, a Christian, came to power after a coup in 2003 and subsequently won two elections that were widely seen as fraudulent. He was ousted in 2013 by the Séléka – a rebel coalition drawn largely from the Muslim minority – which accused him of breaking peace agreements.

The CAR is one of Africa’s poorest and most unstable countries, even though it is rich in resources like diamonds and uranium. The UN estimates that half of the population are dependent on humanitarian assistance and up to a fifth have been displaced.

Russia is allied with President Touadéra and this week said it had sent 300 military instructors to CAR, following a request for help from the government. Russia insists it is not involved in the fighting.