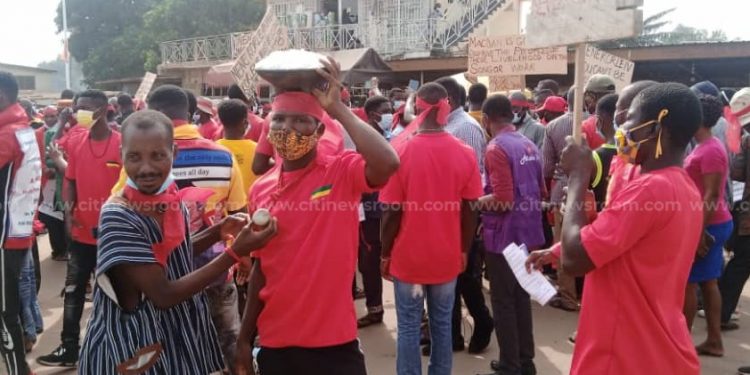 Some indigenes of the Terkpebiawe Clan of Ada within the Greater Accra Region who claim to be the custodial owners of the Songor lagoon on Wednesday, January 27, 2021, embarked on a demonstration exercise to protest against the mining lease granted to Electrochem Ghana Limited to mine salt in the area.

The mining lease according to the people of Ada did not take into consideration the economic plight of the locals whose sole livelihood depends on the Songor lagoon.

The locals say the lease will not only take away their source of livelihood but deprive them of their lands.

They have as such embarked on a demonstration to draw the attention of the government to terminate the said lease granted Electrochem Ghana limited as they claim it does not have the masses at heart.

They say they are ready to fight the lease to the latter should government fail to heed to their request.

Speaking to Citi News, one of the residents stated that “The three mining leases granted to the company is not in our best interest especially as far as our livelihood and our settlement is concerned. What we are saying is that the licences are basically giving the company monopoly over the entire Songor lagoon depriving the larger populace of their livelihood. This technically means none of the Ada residents can mine or win salt in that lagoon.”

“The Songor lagoon is the pot for all Ada people. That is where we all go to get food. So now that they have given the whole thing to one person, how will we survive? We are therefore saying that we will not agree to the lease, so government should take it back so that we will have our freedom to go there whenever once we want to harvest the salt,” another resident stated.

Electrochem Ghana limited, is a subsidiary of the Mcdan Group, commenced operations on the Ada Songor salt project site after a special commissioning ceremony was performed in December 2020.

The Ada Songor salt site is said to have a potential production capacity of about 1.4 million metric tonnes.

University of Environment and Sustainable Development calls on Citi FM/TV