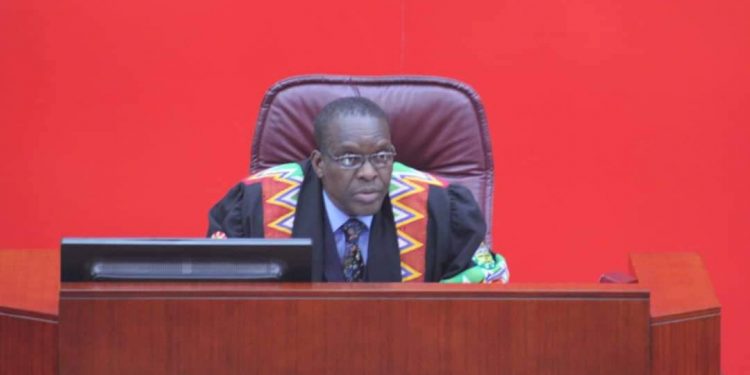 The former Member of Parliament for Nadowli Kaleo and a member of the opposition National Democratic Congress, Alban Kingsford Sumani Bagbin has been elected as the Speaker of the 8th Parliament.

Mr. Bagbin, who was the Second Deputy Speaker in the previous Parliament won the elections with 138 votes.

The opposition National Democratic Congress (NDC) proposed Alban Bagbin as their choice candidate for the Speaker of Parliament while the New Patriotic Party (NPP) proposed Prof. Aaron Mike Oquaye who served as Speaker for the 7th Parliament; 2017 to 2021.

The election of Bagbin was not without controversy as several alien incidents characterized the night including the invasion of military personnel into the parliamentary chamber.

That issue was resolved and the NDC MP allowed to vote subsequently.

During counting of the ballots, the Member of Parliament for Tema West and former Deputy Minister of Trade and Industry ran to the table and snatched the uncounted ballots of Prof. Aaron Mike Oquaye and attempted to bolt with it.

He holds an Executive Masters in Governance and Leadership from the Ghana Institute of Management and Public Administration (GIMPA).

The MP for Nadowli Kaleo and former Majority Leader started schooling at an early age at the Roman Catholic Primary School, Sombo, did his second cycle education at Wa Secondary School and ended at the Tamale Secondary School, where he earned his Ordinary Level and Advanced Level certificates before entering the University of Ghana in 1977.

He is currently the longest serving a member of parliament, having served since 1993 when the first parliament under the 4th Republic was inaugurated.

He has held a number of positions in Parliament since 1994 and capped his law making career with the ultimate, the Majority Leader and Leader of the House.

He was also the chairman of the Public Accounts Committee from 2001 to 2005.

He was also the Vice-Chairman of the Appointments Committee of Parliament.

He did not run again for Parliament in the 2020 elections.