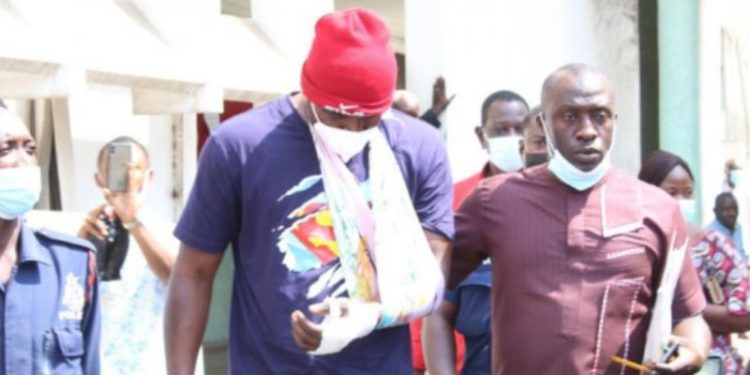 An Accra Circuit Court has adjourned the case involving the shooting incident at Ablekuma Central during the general elections to January 18, 2021.

The court had earlier remanded Collins Quarcoo over the alleged shooting incident at the Ablekuma Central Collation Centre during the December 7, 2020, polls.

The adjournment was because the court did not sit on Monday, January 11, when the case was to be heard.

Quarcoo, who allegedly shot and caused harm to three persons, pleaded not guilty.

He denied the use of the offensive weapon (a Smith and Wesson SD9V 9MM pistol) and causing harm to Pious Asiedu Kwanin, a Journalist, Inspector Nixon Awuni, a Police Officer, and Rashid Umar, a trader.

Kwanin is with the Global News Watch while Umar is a trader and National Democratic Congress (NDC) Vice Chairman for Sabon Zongo Electoral Area.

He said on December 8, 2020, as the collation of election result was ongoing in the constituency, a misunderstanding ensued between party agents of the NDC and the New Patriotic Party (NPP).

Inspector Pobee said the accused, who claimed to be a National Security Operative, came to the Centre and after a brief discussion with the Member of Parliament for the area, moved closer to the centre and allegedly fired gun shots indiscriminately into the crowd.

The prosecution said the accused action resulted in a bullet hitting the left knee of Inspector Awuni and also hit Kwanin in the ankle and Umar at his right knee and left shin.

The prosecution said Awuni and Umar were rushed to the Korle Bu Teaching Hospital whilst Kwanin was sent to the Greater Accra Regional Hospital, where they were admitted for treatment.

He said Quarcoo was arrested by the security personnel, who were on duty at the Collation Centre and handed over to the Regional Criminal Investigations Department.

The Prosecution said in his caution statement, Quarcoo alleged that amid a misunderstanding at the Centre, someone removed a taser (electric shocker) from his side pocket, so he also removed his sidearm and started firing leading to the injuries.

Inspector Pobee said, Quarcoo who sustained head injuries, was released on bail and sent to the hospital for treatment.

Mr Faisal Ibrahim Cisse, Counsel in praying for bail for Quarcoo, told the court that his client had a fixed place of abode and employed as a public officer working with the National Security with the service number GH/POL/19/325 assigned to the Operations Unit of the President.

He said evidence would show that his client was on official duty and the sidearm was released to him for those duties.

He said the facts would reveal that he was a victim in the confusion and still receiving treatment as he suffered hefty blows.

The lawyer said Quarcoo had independent sureties and of good character, thereby pleaded with the court to admit him to bail under favourable conditions.

The court, however, refused the bail application with the reason that the victims were still on admission hence he should be kept in Police custody for a week.