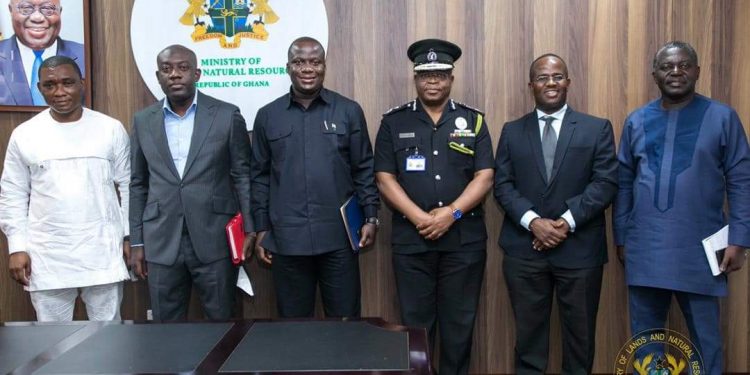 The government has directed all persons undertaking mining reconnaissance and prospecting in forest reserves across the country to indefinitely suspend such activities.

It has also directed the Minerals Commission to desist from processing or granting any request for the renewal of prospecting licenses in forest reserves.

In a statement on Thursday, the Minister of Lands and Natural Resources, Samuel Abu Jinapor, said the various regional security councils have been notified about the directive and are to strictly enforce it.

“The Minister for Lands and Natural Resources hereby directs persons and/or companies engaged in reconnaissance and/or prospecting in Forest Reserves, with or without legal authorization, to suspend such activities until further notice…The Minister for Lands and Natural Resources has further directed the Minerals Commission, with immediate effect, not to accept, process and/or recommend the grant, including the renewal and/or extension, of reconnaissance and prospecting licences in Forest Reserves,” the statement indicated.

The Minister’s directive comes a week after a national consultative dialogue on small-scale mining was held between the government and all stakeholders in the mining sector, on how to curb illegal small-scale mining.

Among the resolutions adopted at the dialogue was a charge to the government to take steps to strictly apply laws and sanctions to all persons who infringe the law, irrespective of political colour or socio-economic status or class.

Mr. Jinapor, in his statement, said many individuals and companies, under the pretext of undertaking reconnaissance or prospecting, engage in illegal mining in forest reserves, a practice that continues to have adverse consequences on the environment.

The Minister said unless he expressly indicates otherwise in writing, “all activities and operations in respect of any reconnaissance and/or prospecting licences in Forest Reserves are hereby suspended until further notice.”

He said all companies and individuals already undertaking reconnaissance and/or prospecting in Ghana’s forest reserves have up to seven days to cease their operations.

“The Minister for Lands and Natural Resources, accordingly, hereby gives persons and/or companies engaged in reconnaissance and/or prospecting in Forest Reserves, seven (7) days from the date of the publication of this notice, to cease their operations and evacuate their equipment accordingly.”