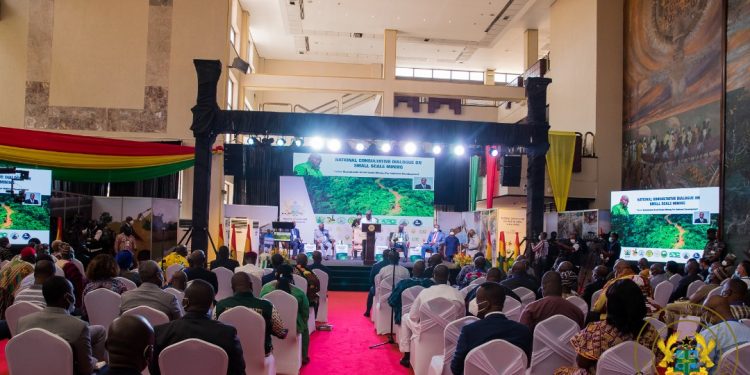 The General Secretary of the Small Scale Miners Association, Godwin Armah, says the association is hopeful that the fight against illegal mining will be successful following a two-day National Consultative Dialogue on Small-Scale Mining involving all stakeholders in Accra.

He said the association will communicate the decisions and resolutions taken at the dialogue to its members and is confident of their full cooperation to ensure that the outlined goals and objectives are achieved.

Speaking on Eyewitness News, Mr. Armah said the association is happy about its involvement in the dialogue and the level of engagement with the primary stakeholders in the sector.

“We are going to meet our members at the grassroots to see how we can collaborate to ensure that this vision is realized. There have been several dialogues in the past, but this one is different. We were involved right from the start. We are sure that when we carry this to the regional and district level, we will be able to sustain this good initiative,” he stated.

The government put together a two-day National Consultative Dialogue on Small-Scale Mining involving about 14 stakeholders, including former ministers of Lands and Natural Resources, members of the Council of State, members of the National House of Chiefs, heads of security agencies, actors in the mining industry and members of the Small-Scale Miners Association to develop a roadmap for tackling the problem of illegal small-scale mining in the country.

At the end of the dialogue, the stakeholders, among other things, charged the government to take steps to strictly apply the country’s mining laws.

The Small-Scale Miners Association, which was one of the stakeholders involved in the dialogue proposed the decentralization of the oversight of mining activities to avoid issues of political interference and protests.

“We also realized that the issue of illegal mining is a national problem, but it can be managed at the local level, and we proposed that we can have a community enforcement strategy where the mining activities will be managed at the community level between the chiefs, small-scale miners, regulators and youth leaders to ensure that it will not escalate from the community and go out of hand.”

A communiqué was issued after the dialogue. Check below for the full document:

The Dialogue resolved that the Ministry of Lands and Natural Resources will take appropriate steps, legislative and/or executive action, as the case may be, to give effect to the set of measures arising from this Dialogue and approved by government.

MINISTER FOR LANDS AND NATURAL RESOURCES