#FixTheCountry: Ghanaians to protest over ‘government’s broken promises’ on May 9 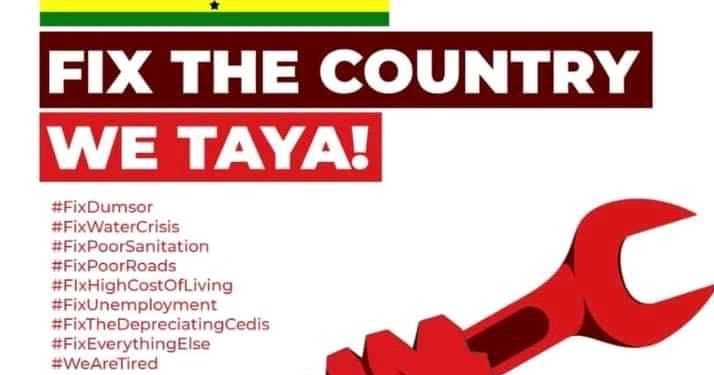 A group of Ghanaians who are unhappy with what they call the economic challenges in the country have declared their intention to protest on May 9, 2021.

The group has been expressing its displeasure over successive government’s failure to improve the living standards of Ghanaians on Twitter using the hashtag #FixTheCountry.

They cited dumsor, unemployment, poor healthcare systems as proof of successive governments’ mismanagement of the country.

“The event which is a single purpose event is being organized on the back of a string of consistently broken promises by successive governments and in the exercise of our democratic rights as citizens to express our frustration over perennial governmental incompetence, refusal and/or inability to fix the country,” the group said in a statement.

The group does not intend to deliver a petition to the presidency but will converge on Independence Square at 8:30 am for the march to commence at 9:30 am.

“The March will proceed peacefully and at a socially distanced pace from the Blackstar Independence Square Station. From the Independence Square, the group will continue along the 28th February Road, then join the Atta Mills High Street; then down Graphic Road towards circle, using Dr. Busia Highway, and then return on Dr Busia Highway to meet Ring Road West Road.”

The group promised to hold a peaceful protest while adhering to COVID-19 safety protocols.

“We have no intention of gaining entry into any security installation, destroying private property, or breaching the peace in any other way. The march is about due process and government accountability. As such we intend to conduct the march in a manner consistent with the laws of the country, with particular regard to our rights and duties under the Constitution and such other relevant.”

#Fixthecountry has been in the trends for about 48 hours.

It was initially started by some young persons on Twitter, but some celebrities later joined the campaign to hold the government accountable.

An online petition which was launched to support the cause has gathered over 2,000 signatures so far.