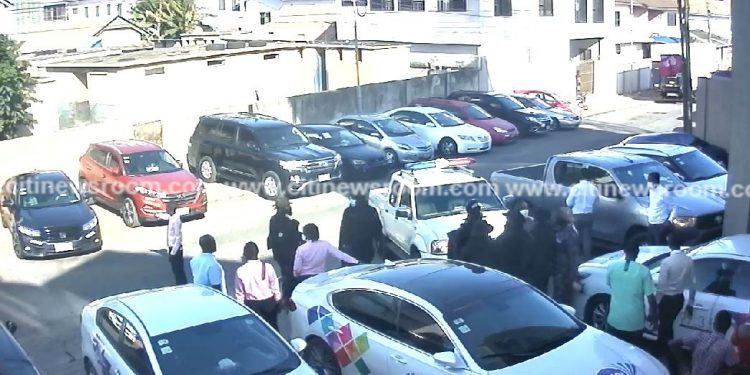 The National Media Commission (NMC), has said it hopes to conclude its investigations into the assault on Citi News’ journalist, Caleb Kudah, and the invasion of the premises of Citi FM and Citi TV by National Security operatives in two weeks.

Management of the media house on Monday morning presented a petition to the regulatory body demanding an investigation into the actions of the officers of the national security that have been widely condemned by many Civil Society Organizations and Ghanaians in general.

Receiving the petition, the Executive Secretary of the NMC, George Sarpong, indicated that the focus of the Commission is to unravel the true facts which will determine the appropriate actions to be taken.

“We thank you that, in a moment like this, you choose not to apply an unorthodox approach, but you seek a constitutional resolution to the matter. So I can assure you that we are going to treat this with all the seriousness it deserves. It is my expectation that within two weeks, we should have reached a consensus”, he promised.

Citi FM and Citi TV have specifically petitioned the NMC to use its mandate under the constitution that enjoins it to ensure the safety of journalists, to investigate or cause to be investigated the two incidents and recommend appropriate actions.

COMPLAINT TO THE NMC ON THE BRUTALIZATION OF CITI FM JOURNALIST CALEB KUDAHAND THE RAID OF CITI FM ON MAY 11, 2021

Management of Citi FM& CITI TV is lodging this formal complaint to the National Media Commission on the conduct of some officers of the National Security Ministry against two journalists – Mr. Caleb Kudah and Mrs. Zoe Abu-Baidoo Addoworking with Citi FM/Citi TV and the raiding of the offices of Citi FM & Citi TV by policemen from National SecurityMinistry on the same day.

“to take the appropriate measures that ensure the establishment and maintenance of the highest journalistic standards in the mass media, including the investigation, mediation and settlement of complaints made against or by the press or other mass media;”(emphasis ours)

On Tuesday, May 11, 2021, the Director of Operations of National Security, Lt. Col. Frank Agyeman, and a team of SWAT policemen working under the direction of DSP Samuel KojoAzuguunlawfullyarrested, detained, brutalized and tortured Mr. Caleb Kudahand subsequently, raided in a Rambo-Style the offices of Citi FM/Citi by men from the same unit, in a bid to arrest Mrs. Zoe Abu-Baidoo Addo. The incident caused alarm, fear and panic amongst the members of staff of the company and endangered the lives of innocent Ghanaians.

Around 2:30 pm on Tuesday, May 11, 2021 Citi FM/Citi TV reporters Caleb Kudah went to the carp ark of the Ministry of National Security to take photos of a number of abandoned Chevrolet vehicles imported into the country in 2016but had yet to be distributed as of 2019.

Mr. Kudah was doing a follow-up on the state of those Chevrolet vehicles to ascertain if the vehicles were still at the location- a matter of vital public interest regarding the use of state resources over which the public is entitled to the truth.

After taking photos of the vehicles he made a short video of some other old vehicles parked under a  shed adjacent to the location of the Chevrolet vehicles.

On his way out of the premises, he was accosted by an official of the National Security Ministry, who raised an alarm and accused him of filming national security installations to foment trouble.

Mr. Kudah was immediately surrounded by policemen who seized his phone and roughed him up before sending him into a building in which he met the head of the SWAT Unit DSP Azugu.

During questioning, Mr. Kudahidentified himself to the officials as a  journalist from Citi FM/Citi TV who had come to take photos of some abandoned MASLOC vehicles, which was a follow up on a story he had earlier done.

DSP Azugu placed a phone call to Mr. Richard Mensah, Director of Television of Citi TV to confirm if indeed Mr.Caleb Kudah was a member of staff of Citi FM/CITI TV to which he affirmed.

This notwithstanding, Mr.Kudah was slapped several times and punched indiscriminately by the officers several times while being questioned by DSP Azugu although he had identified himself as a journalist from Citi FM/Citi TV.

After some minutes of that ordeal, he was brought outside the building to underneath a mango tree, at which point he was approached by a well-dressed man in a light-green suit, whom he later identified by name as  Lt Col Frank Agyeman.

Lt Col Agyeman upon approaching the now roughed-up and petrified Mr. Kudah, gave him a hefty slap and asked him to kneel down. He then kicked him in the groin and left him lying down.

This action by Lt. Col. Agyeman, seemed to have invigorated the policemen who continued punching and slapping Mr. Kudah for several minutes.

Mr. Kudah pleaded for mercy and tried to explain why he was there, but his cries fell on deaf ears as the policemen continued to indiscriminately punch and slap him from behind.

In total, Mr. Kudah was manhandled and brutalized for close to 5 hours in detention, both in the office of DSP  Azugu, as well as in the main national security building.

When he was sent to the main national security building, he was thrown into a room without windows (with some other suspects)  and “worked on” by one of the inmates who threatened him and asked him to remove his shoes and do push-ups amid threats and insults.

He recounts how thirsty he was and asked for water, which he was given, but the handcuffs he was wearing and his tired hands could barely raise the water to his lips.

His horrific ordeal continued until around 7 pm when he was released.

Mr. Kudah informed the management of the Citi FM/Citi TV that he was made to write a statement without allowing him the right to counsel as prescribed by law.

While Mr. Kudah was in detention, a plain-clothes police officer went on to illegally go through his seized phone, and upon realizing that some of the photos/Videos Caleb took had been sent to the phone Mrs. Zoe Abu-BaidooAddo also a Broadcast Journalist at Citi, proceeded under subterfuge to chat with Zoe using Caleb’s phone to create the impression that he was okay, and by so doing tried to lure her out of the office to be arrested.

When this approach failed, they then called Mrs. Abu-BaidooAddo with Mr. Kudah’s phone to ask her to report at the National Security Ministry at which point she explained that she would need to confer with management before honoring the invitation by telephone.

Mrs. Abu-BaidooAddo subsequently informed  Mr. Richard Mensah of the call, at which point he indicated to her that he would talk to DSP Azugu while trying to secure Mr. Kudah’s release.

A few minutes after this, about seven or eight fully armed SWAT police officers from the National Security Ministry, led by a plain clothes officer stormed Citi FM/Citi TV in a Rambo-style in  3 pick up vehicles, accosted Mrs. Abu-Baidoo Addo (who was on a phone call at the car park) confiscated her phone and chased her, to the back of Citi FM in a bid to arrest her.

A chaotic scene ensued amid the cocking of guns and shouts, which was not only unprofessional but intimidating and dangerous to both Mrs. Abu-BaidooAddo and the members of staff who had come out in response to the ensuing commotion.

The approach adopted by the SWAT team in their bid to arrest Mrs. Abu-Baidoo Addo, within the precincts of her own office premises was potentially life-threatening to her and the members of staff present at the scene.

It took the management of Citi FM/Citi TV in particular the CEO, Mr. Samuel Attah-Mensah intervention to calm the situation. The Policemen then agreed, for a team from Citi FM/TV’s Management to accompany Mrs. Zoe Abu-Baidoo Addo to the National Security Office.

The team from management had a cordial meeting with DSP Azugu, and left his office with the impression that all that was required was for the photos/videos to be deleted and the two would be released immediately.

The team was however directed to see Lt. Col Agyeman, who upon seeing the delegation, asked for Mrs. Abu-Baidoo Addo to follow him and refused to speak to the team from Citi FM/TV management.

Mrs. Abu-BaidooAddowas released at about 5:30 pm after almost 45 minutes in detention while Mr. Kudahwas released around 7pm that evening, following the intervention of the Deputy National Security Coordinator,  Mr. Edward Kwaku Asomaning who Citi Management reached out to.

Mr. Kudah has been sent to the hospital for medical examination and is currently recuperating from the physical and psychological effects of his ordeal.

Till date, no formal charges have been leveled against the two journalists.

However, the National Security Ministry has indicated that they are investigating the incident.

The statement issued by the Chief Director of the Ministry recounting their version of the events of the day and announcing an internal investigation does not give us an indication that the National Security Ministry will provide an independent and satisfactory investigation in these allegations.

We are hereby petitioning the National Media Commission to use its mandate under the Constitution that enjoins it to ensure the safety of journalists to investigate or cause to be investigated the two incidents described above and recommend appropriate actions therefrom.