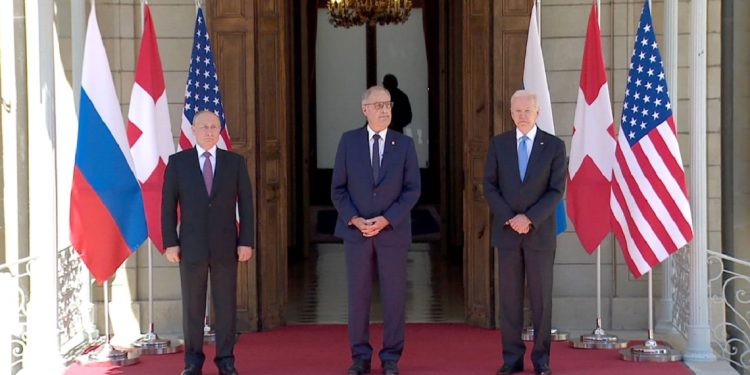 On 11th June, Ghana was elected to the United Nations Security Council as a non-permanent member for the 2022-23 term with a decisive approval from the 193 member states of the UN General Assembly: Ghana obtained 185 out of the 190 valid ballots cast.

Switzerland congratulates Ghana on the impressive election result which well reflects the country’s respected status in international affairs and the promotion of peace, democracy and stability.

Just a few days after the UNSC election, the world’s eyes were focused on Switzerland and Geneva, where the first presidential meeting between the US president Joe Biden and his Russian counterpart Vladimir Putin was hosted on 16th June. As the host country, Switzerland deployed its good services and took all the necessary measures to ensure that talks took place as safely and as discreetly as possible.

It was also not the first time Geneva has hosted a big summit between the leaders of the two countries, as President Ronald Reagan and Secretary General Mikhail Gorbachev famously met in the city in 1985 for a historic encounter.

Geneva is not for nothing called the “Capital of Peace”: Indeed, the picturesque Swiss city looks back on a long tradition of hosting international and non-governmental organizations, scientific and academic actors, civil society and the private sector who today work together to find solutions to the global challenges of our societies.

The US-Russian summit will be counted among the more than 4,700 visits of heads of state and government, ministers and other dignitaries that are made to Geneva every year.

This longstanding commitment by Switzerland to international peace and security is one of the reasons, why Switzerland also aims to be elected next year as a non-permanent member of UNSC for the period 2023-2024. This article will shed some light on the ongoing campaign and what Switzerland’s foreign policy stands for on the bilateral and multilateral stage.

Switzerland’s candidacy for the UN Security Council comes as a premiere after the country officially joined the UN in 2002. Proud of its democratic history, Switzerland is the only country in the world that has joined the UN based on a popular vote, which in a way explains our relatively late arrival.

The then UN Secretary General, the late Kofi Annan teased, “The Swiss are here. We’ve waited a long time,” as the Swiss flag was raised alongside the 189 flags of the other member states.

Our campaign, “A Plus for Peace”, is a continuation of the work we have accomplished at the UN since our accession. Switzerland has held key positions in all major UN bodies and now wishes to contribute her experience and ideas to the Security Council – a great responsibility that the country is ready to take on with humility and enthusiasm. This is why peace and security is a significant theme of our Foreign Policy Strategy 2020–23.

Our country is also prioritizing prosperity as a foreign policy theme, which among other things, we will achieve by promoting market access and creating new economic opportunities for developing countries. Support for the private sector initiatives through access to capital and promoting entrepreneurship to aid the creation of decent jobs is also an important approach.

In the remaining thematic areas, Switzerland will focus on sustainable development, while concentrating on digitalization also. Our outlook summarized above, show that we a poised for meaningful impact in our engagement with the wider world.

Just like Ghana, Switzerland a diverse nation, with four official languages and many cultures and religions, has learned to use dialogue and broad engagement to develop solutions. This approach also shapes our foreign policy, with people at the center of our commitment to “a just and peaceful international order” as stated in the Federal Constitution.

Switzerland has a long tradition as a neutral and independent state. We have had no colonial possessions and have never aligned ourselves militarily. The firm belief that respect for the rule of law and the realization of human rights for all are the foundations for peaceful, prosperous and sustainable societies guides our foreign policy.

Dialogue, confidence building and consensus-seeking are in our country’s DNA. Switzerland’s experience and our engagement in the UN encourage us to lead by example. We will be a responsive Security Council member, collaborating with and serving the interests of the wider membership.

We are committed to a strong, effective multilateral system. As a non-permanent member of the UN Security Council, we will continue working for humanity, sustainable development, multilateralism, innovation, and peace.

With reference to the excellent and ever expanding bilateral relations between Ghana and Switzerland, it’s to note with pleasure that Federal Councillor Simonetta Sommaruga plans to pay an official visit to Ghana in summer. FC Sommaruga was the President of the Swiss Confederation in 2020, who – on behalf of the Swiss governmental body comprised of seven Ministers/Federal Councillors – invited President Nana Akufo-Addo for a State Visit to Switzerland in February 2020.

In the aftermath of this historic visit, a bilateral agreement was signed in Accra in November 2020 which will enable Switzerland to reduce its CO2 emissions partly abroad through climate protection projects in Ghana.

This topic and the question how both countries can assume responsibility in international climate policy will be at core of the two days’ working visit of Federal Councillor Simonetta Sommaruga who is not only the Minister in charge of Environment but also Transportation, Energy and Communication.

The intensive diplomacy between our two countries reflects the importance Switzerland attributes to Ghana and the African continent in general.

The first ever Sub-Saharan Africa Strategy launched by the Swiss government in January 2021 will provide exclusive focus and framework for Switzerland’s engagement with the continent.

Switzerland sees Ghana as a prominent player in the Sub-Saharan region, or what we would call a “lion economy” – in other words, a promising African country with high economic growth potential. Switzerland and its Embassy have been present in Ghana since 1960 and we hope that the mutually beneficial and dynamic relations between Ghana and Switzerland continue to grow strongly in the years to come.

The possibility of serving together as members of the UN Security Council in 2023 is just one of many opportunities for future collaboration!