Goodluck Jonathan mourns TB Joshua; says he was a devout man of God 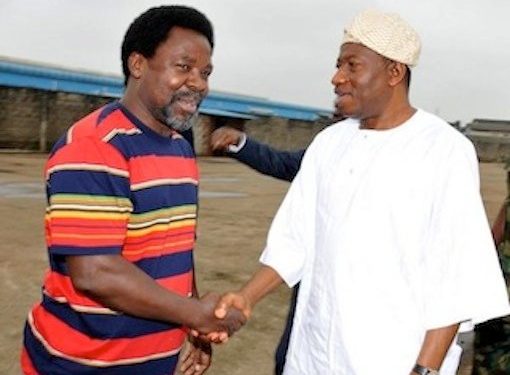 TB Joshua and Goodluck Jonathan in a handshake.

A former President of Nigeria, Dr. Goodluck Ebele Jonathan, has expressed sadness over the death of the spiritual leader of the Synagogue Church of All Nations (SCOAN), Prophet TB Joshua, describing him as a devout man of God.

In a message of condolence to TB Joshua’s family and the SCOAN congregation, the former President noted that the late televangelist who died at the age of 57 served God and humanity with relentless passion.

Dr. Jonathan also prayed to God to grant millions of TB Joshua’s followers across the world the strength to cope with his exit.

“I am saddened to hear about the death of Prophet Temitope Balogun Joshua known as TB Joshua, the Spiritual Leader of Synagogue Church of All Nations (SCOAN), at a young age of 57. TB Joshua was a devout man of God who served God and humanity with relentless passion. He was a man of sound doctrine, meek and faithful to his call and passion of reconciling men to God and offering hope to humanity.”

“As a Christian leader, TB Joshua and his Ministry exemplified Christ in faith, love, and charity; positively impacting the lives of many Nigerians, Africans, and millions of people across the world. I condole with his family, his church, and millions of his followers across the world. May God grant them peace and strength to cope with this loss.”

In 2015, Prophet T.B. Joshua said he had told President Goodluck Jonathan weeks before the 28 March presidential election that his regime had come to an end. He claimed he called Jonathan by phone and the President promptly sent a close aide to meet with him.

Joshua praised Jonathan’s tenure in office, saying that he had served his nation well despite the immense security challenges.

TB Joshua’s Ministry is globally recognized through his television platform, Emmanuel TV, run by the church as one of Nigeria’s biggest Christian broadcast stations available worldwide on digital and terrestrial switches.

Prior to that incident in Nigeria, one of his churches in Ghana’s capital, Accra, recorded a stampede in 2013, leaving four people dead.

He sharply divided opinions in his country and across the globe as some questioned the genuineness of his prophetic Ministry whereas others praised and revered him.

For decades, he continued to minister healing and deliverance in his church, attracting many people from different parts of the world including presidents and celebrities.

Although the cause of death has not been officially stated, there are reports that he suffered a stroke two months ago, and was sent to Turkey to undergo treatment.