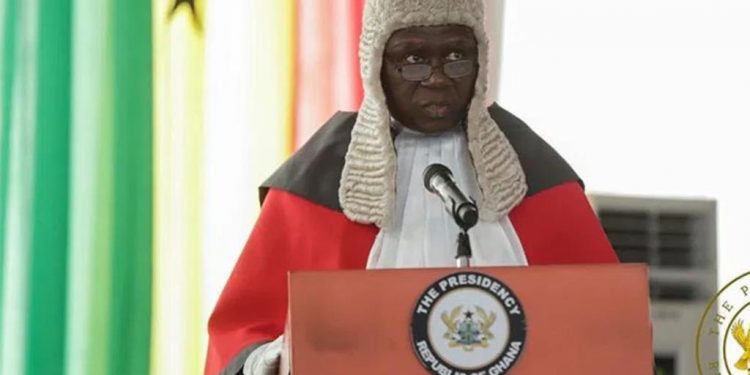 The Chief Justice, Kwasi Anin-Yeboah, says the Judiciary will contribute its quota in helping government win the ongoing fight against illegal mining, also known as ‘galamsey’.

He says the third arm of government is aware of the continuous devastation of natural resources through illegal mining, and will ensure that laws governing Ghana’s mining sector are enforced at all times.

The Chief Justice was speaking in Kumasi at a training workshop for 32 judges and magistrates on the Offences and Penalties regime under the Minerals and Mining Act, 2006(Act 703).

“We are a nation of laws. That is something that I believe in, and we are all proud of it. This means that when abhorrent conduct such as this arises, it is the law that we turn to. When new laws are needed, we readily pass them to meet the challenges of the times. When old laws need updating to fit the moment, we must [update them], and where there are already laws in place, we must enforce them to the letter.”

“This is why this partnership with the Minerals Commission is very important. It is gratifying that they have chosen to partner with us to ensure that those engaging in this assault on state resources receive the punishment or correction they deserve according to the law. We will do all within our power to help the nation win this fight,” he stressed.

At the same event, the Minister for Lands and Natural Resources, Samuel Abdulai Jinapor, mentioned that only strict enforcement of the county’s mining laws will help sanitise the sector.

“The efforts of government and other actors will not amount to much unless the Judiciary – the vanguard of the rule of law in the country – is equipped with the necessary tools and skills to enforce without fear or favour, the mining laws of our country. The strict enforcement of the mining laws of our country, particularly without regard to status in society, is for the success of our national effort to sanitise this industry.”

“It is my fervent belief that with the support and vigilance of all players, we will be able to preserve our nation’s land, forest reserves and wildlife, and improve on the engagement of our natural resources for the benefit of generations unborn,” the Minister said.