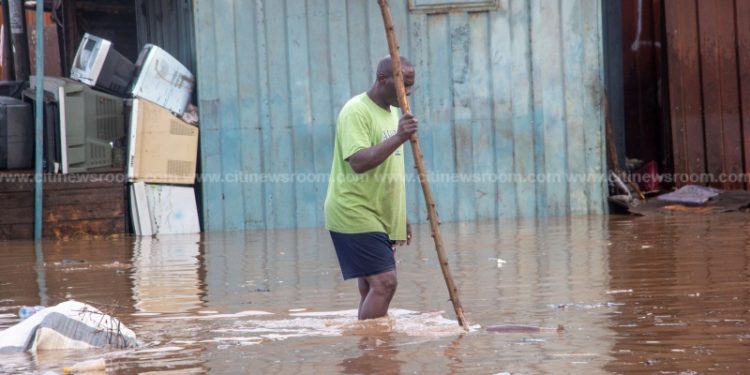 More than 200 residents of Atasemanso in the Kumasi Metropolis have been displaced after two days of heavy rainfall.

The rainfalls also resulted in six people being hospitalised after they were trapped under collapsing structures.

Kumasi, Ghana’s second-largest city, is witnessing one of its worst moments as the authorities and residents have been caught hands down, without any clue to finding a remedy to the latest flooding.

The National Disaster Management Organisation (NADMO) has confirmed three people dead, including a one-year-old boy, whose lifeless body was retrieved in the Sawaba stream on Thursday afternoon.

Nana Adjei Kusi Oboadum, the Assembly Member for Atasemanso, in an interview with the Ghana News Agency (GNA), said he had notified the disaster management organisation to support the affected residents.

The Unit Committee, he said, directed residents living in flood-prone areas to vacate their premises temporarily until the rains subsided.

Some experts have attributed perennial flooding to improper planning, accusing city authorities of negligence to duty and allowing construction of structures on waterways as well as rezoning eco-friendly buffer zones, including wetlands.

A considerable number of structures at Atasemanso are currently submerged.

Nana Kusi Oboadum decried the lukewarm attitude of the authorities to act on a proposal he had submitted for some structures sited on waterways to be demolished.

Beyond counting: The need for universal participation in the 2021 Population and Housing [Article]

Beyond counting: The need for universal participation in the 2021 Population and Housing [Article]