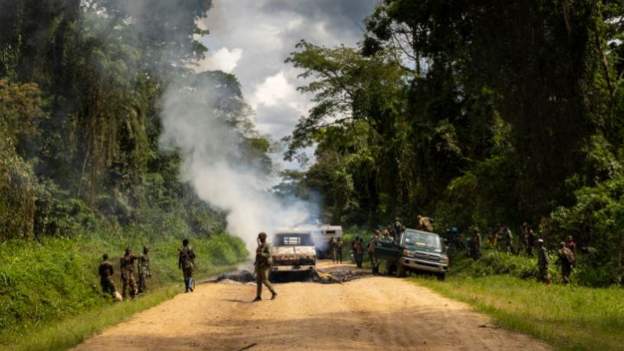 At least 19 people have died in a series of clashes in the Democratic Republic of Congo.

Doctors Without Borders or Médecins Sans Frontières said on Wednesday that 10 civilians were killed when a hospital was destroyed in the eastern village of Boga on Monday.

Several other bodies were reportedly found after farmers were targeted near the border between North Kivu and Ituri provinces.

Frequent raids are carried out in the region by the Allied Democratic Forces or ADF – one of dozens of armed groups in eastern DR Congo.

Matthias Gillman, a spokesman of the UN peacekeeping mission – or Monusco – called for more help to police the area:

“This area has been at risk for a long time because it’s very remote, it’s very hard to reach, it’s huge, it lacks the presence of state authority that is necessary, which is why the Monusco force … is looking at reinforcing its presence.

“Most importantly we are advocating to the Congolese army and Congolese police for a reinforced presence of their own troops and their own soldiers and policemen,” he said.