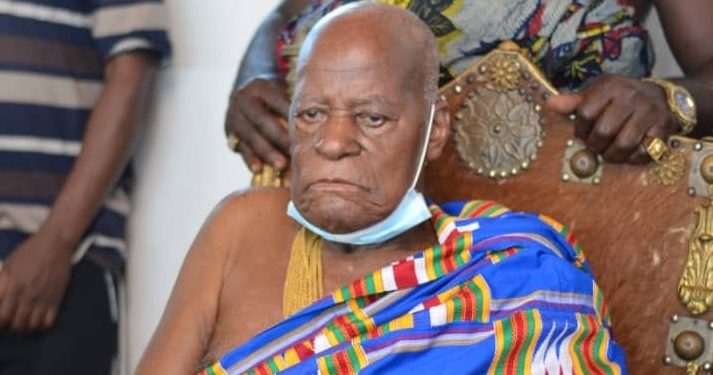 Nana Akuoko Sarpong is not King Solomon in the bible. If he were to write the Book of Ecclesiastes, his conclusion will not be that life is meaningless.

In the autumn of his life, he looks back on his life and declares that “I am fulfilled.”

Sitting on his throne as Omanhene of Agogo, he is at pains to announce that “I am not in competition with anybody. As a lawyer, I scored some remarkable landmark cases. I entered politics but it is over. I’ve been in Parliament, I have been a Minister. In 46 years as chief, I have served my people well.”

By 1972/1974, the trajectory of young Sarpong’s life projected nothing less than a roaring career at the Bar.

With an LLB (1963) and called to the Bar in 1965, he had shot to fame on the back of the famous Twinkle J case in Cape Coast. By 1974, he had put up what, even by 2021 standards, qualifies to be called a mansion within the Airport Residential Area in Accra.

Sarpong wanted badly to be an MP, having cut his political teeth working with the likes of Obed Asamoah in the Third Force Movement, a political organization.

Chieftaincy therefore was not on his mind when he paid a visit to Agogo one weekend in September 1975, but he was “arrested” by the chiefs. Finding no way of escape, he pleaded that he would accept the position, but on one condition, that they not stand in his way when the time came for him to enter politics. They agreed, and thus, on 23rd December, 1975 he was enstooled Omanhene.

In the 1979 elections, he stood on the Popular Front Party ticket and became the MP for Agogo.

In Parliament, the Minority Caucus, including John Agyekum Kufuor, Kojo Mpiani and Jones Ofori Atta, appointed him its Spokesman for Interior and Defence.

In the Rawlings regime, he held three successive portfolios: PNDC Secretary (Minister) for Health, the Interior and Chieftaincy & Culture.

To the Agogo State and to Asante Akyem, Nana Akuoko Sarpong has been what every chief should be, a facilitator lobbying to bring about development.

Agogo is traditionally a Presbyterian community. With the church came a hospital, a Nursing and Midwifery Training College and a Women’s College of Education.

A chance meeting between Nana and Most Rev. Dr Sam Prempeh, the 14th Moderator, resulted in the establishment of the Faculty of Health Sciences of the Presbyterian University at Agogo in 2007.

Agogo had no potable water. Nana had connection to Biwater, the international NGO, and he used it. Clean water now flows through the taps not only in Agogo, but in most of Asante Akim North.

In 1985, Nana obtained permission from Forestry Commission to use 1,000 hectares of Agogo’s degraded forest for teak cultivation. In between the trees, he planted plantain. The plantain farm was so successful that at the 2008 Farmers Day, he personally won the Best Plantain Farmer award.

Encouraged by this, the entire township took to plantain cultivation. Agogo is now so blessed with plantain farms it has instituted an annual Plantain Festival. From plantain cultivation, a woman in the town has built 12 hostels to accommodate students of the university.

After 35 years, the 4,000 teak trees are ready for harvesting. A foreign company is offering GHc400.00 per tree! And yet, Nana reflects, “I didn’t do it for money; as a matter of fact, I didn’t envisage that the trees would mature in my lifetime.”

Nana has personally financed the building of a new palace befitting the status of a state on the cusp of greatness.

Having put that behind him, he has set his sights on tourism. He is in the process of creating a Crocodile Pond with crocodiles harvested from the Afram River.

How much is all this costing him? His reply is philosophical. “When you start, the momentum to finish will come and money will be available. Nothing gets done until it gets started, and nothing gets started until it is begun.”

Nana is a fine dancer of waltz and slow fox trot; he was actually a tutor for the University Dancing Club.

In whichever area of life Nana Akuoko Sarpong has found himself, he has been guided by a principle: “No mediocrity. I do it and I do it well.” No wonder, his life is littered with trophies and accolades from around the world.

On Wednesday, August 11, Nana Akuoko Sarpong will be 83. Pond him, he is a Vandal