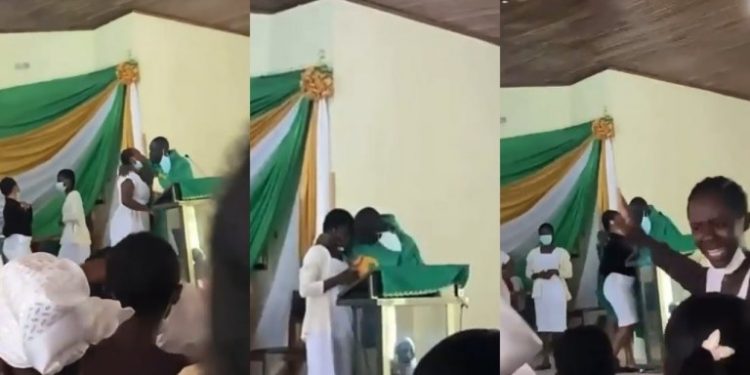 The Anglican Church of Ghana has assured that it will make public the outcome of investigations into the case of a priest ‘force-kissing’ some female students at the St. Monica’s College of Education of the Asante-Mampong Diocese in the Ashanti Region.

In an interview on the Citi Breakfast Show on the issue, the Executive Director of the Metropolitan Archbishop of Ghana, Venerable Dr. George Dawson-Ahmoah condemned the act.

“We are really disturbed. This is not good news at all. We admit that the priest is ours and the incident actually happened in the school.”

He reiterated the church’s commitment to getting to the bottom of the matter.

“We have begun investigations into the matter. We have also watched the video, and that is the only information we have thus far. But we want to at least give the priest a listening ear. All stakeholders will be involved to bring a lasting resolution to the issue. The church won’t take this issue for granted.”

Rev. Fr Baltharzar Obeng Larbi of the St. Monica’s College of Education, fully dressed in his cassock, was seen in a video circulating on social media kissing in turns some girls who were on stage with him on Sunday, August 15, 2021.

In one instance, he was seen gesturing to one of the girls, who appeared very uncomfortable with the move, to take off her face mask before holding her head and giving her a kiss on the lips.

The video, shot by a member of the audience, has generated wide condemnation on social media, although a few people have jumped to the Reverend father’s defence, describing his action as a ‘holy kiss’.

Reports yet to be independently verified by Citi News indicate that the Rev. Fr. Larbi subjected the girls to the kissing after gifting them an undisclosed amount of money each and presenting them with certificates after a bible quiz.

The Rev. Father is believed to be a lawyer.

Ghana must exploit and monetize its gas for industrialisation – NAPO

Ghana must exploit and monetize its gas for industrialisation - NAPO