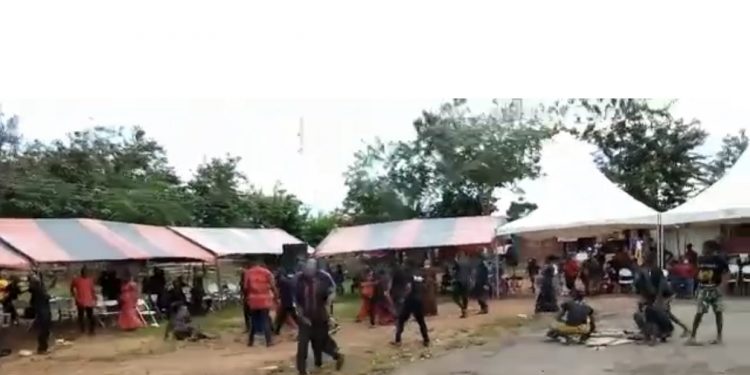 The Suhum Police Command in the Eastern Region is on a manhunt for one Jamalo, who inflicted knife wounds on one Kwasi Amoani at a funeral ceremony in Suhum on Saturday, August 28, 2021.

Jamalo, who is the driver of the Suhum Member of Parliament according to the police, attacked the victim who is also a member of the NPP communications team after a misunderstanding ensued at the funeral of another party communicator.

The misunderstanding which resulted in a free for all fight among supporters of the MP and another who wants to unseat the MP, also resulted in the injury of another party member, who was later treated and discharged at the Suhum Government Hospital.

The Eastern Regional Police Public Relations Officer, DSP Ebenezer Tetteh in a Citi News said moves are underway to get the suspect arrested.

He also disclosed that the victim who sustained deep knife wounds on the forehead is responding to treatment at the emergency ward of the Suhum Government Hospital.

He added that another victim, who suffered bruises on the lips has since been treated and discharged.

“The Suhum Police Command is investigating a case of causing harm that ensued yesterday, Saturday, August 28, 2021, around 5pm.”

“Whiles the members of the NPP in the Suhum constituency were mourning a colleague at the Suhum Council, a misunderstanding ensued between some party communicators and the followers of the MP, and in the process one Jamal inflicted a deep knife wound on the head of the victim, one Kwasi Amoani 51, and the matter was reported to the police and the complaint was subsequently taken to the Suhum Government Hospital where he is responding to treatment at the emergency ward.”

“He’s in a stable condition and another victim who suffered some bruises was treated and discharged. Meanwhile efforts are underway to get the suspect arrested.”