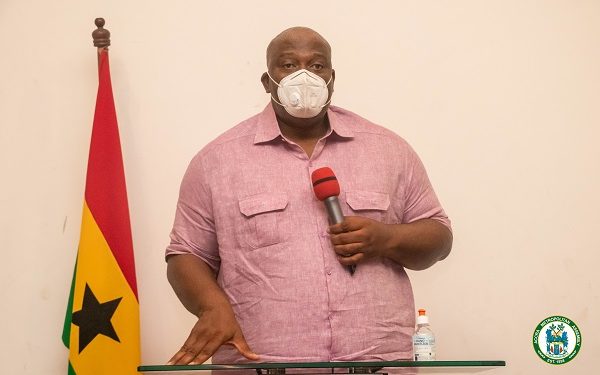 Henry Quartey, the Greater Accra Regional Minister, has advised chiefs in the region to put an end to the indiscriminate sale of lands.

The Minister says the rate at which chiefs in Accra sell lands is stifling the needed development the region deserves.

Mr. Quartey who was addressing the 2021 Homowo Lecture series in Accra lamented the indiscriminate land sale coupled with the attendant issues of rent and land litigation.

He said some of these things give the region a bad name.

“The chiefs take four acres of land and then exchange it for 4×4 vehicles. The outsiders will use those lands for real estate development and sell them to others to the region’s disadvantage. Not only that, there are a lot of buildings and houses in the region, but the landlords have rented them all out for commercial purposes. Some have also been leased for 40  or 50 years to non-indigenes.”

“Some private individuals are also selling lands in Ga communities for US$300,000 to Chinese nationals. If they are unable to pay too, then they exchange the lands with cars. There are also about 30,000 land litigation issues at the court involving Ga Chiefs. No wonder, there are some communities with about four chiefs,” he said.

The illegal sale of lands in Ga communities has constantly been fuelling conflict among family members and the rightful landowners.

This has increased the demand for landguards in the region.

Some parcels of lands meant for socio-economic activities in these areas have at times been lost to external developers to the detriment of the indigenes.

The lands are sometimes sold without explanation to the town folks; a situation they find quite worrying.

There are days such issues have led to community protests.

“Once more, I beg you, the chiefs, to stop selling the [Accra] lands,” Mr. Quartey pleaded.

The Minister also used the occasion to advise against acts of division between members of the Ga community, adding that the manner the Greater Accra Region lags behind can probably be reversed if indigenes foster unity among themselves for a collective goal.

He thus called for an all-hands-on-deck approach in revamping the region’s socio-economic progress.

“Our very culture is dying. But one may ask, how have we branded our culture, and how has it been accepted? Have we not shot ourselves in the foot? If you analyse these things, you can ask yourself; why is our culture declining? We’ve reached a point where we have to say, let bygones be bygones and rally our people behind one leader”, Henry Quartey added.

He further called for the establishment of a Ga-Adangbe research centre to help preserve the history and culture of the Ga people.

“We have to work on what I spoke about. You can call it the Ga-Adangbe research centre or any way you want so that our history and everything about us is kept there to serve as the hub of our history,” he said.