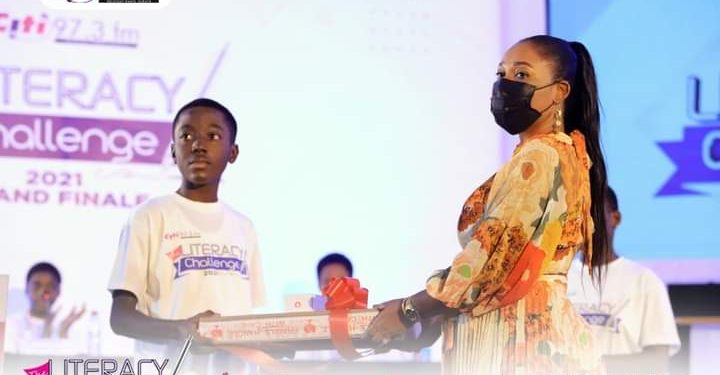 15-year-old Alfred Anarfi Kyeremanteng of the Happy Kids School in Accra, has been crowned champion of the 2021 edition of Citi FM‘s ‘The Literacy Challenge’.

He beat nine other contestants during the grand finale held at the Alisa Hotel, on Saturday, September 18, 2021.

Indeed, it was a great display of healthy academic and knowledge rivalry, but after three rounds of a grueling contest, Alfred emerged winner by a point after garnering a total of 49 points. 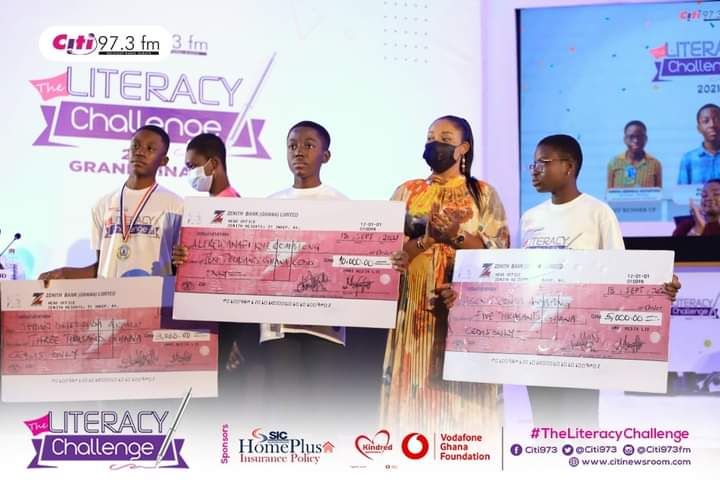 Apart from the bragging rights, Alfred walks away with a cash prize of GHS 10,000, a laptop,  full-year free internet subscription, a MiFi from the Vodafone Ghana Foundation and a gift bag from SIC Insurance PLC.

For this victory, Alfred is also to be announced as the Vodafone Ghana Foundation National Instant School Ambassador. 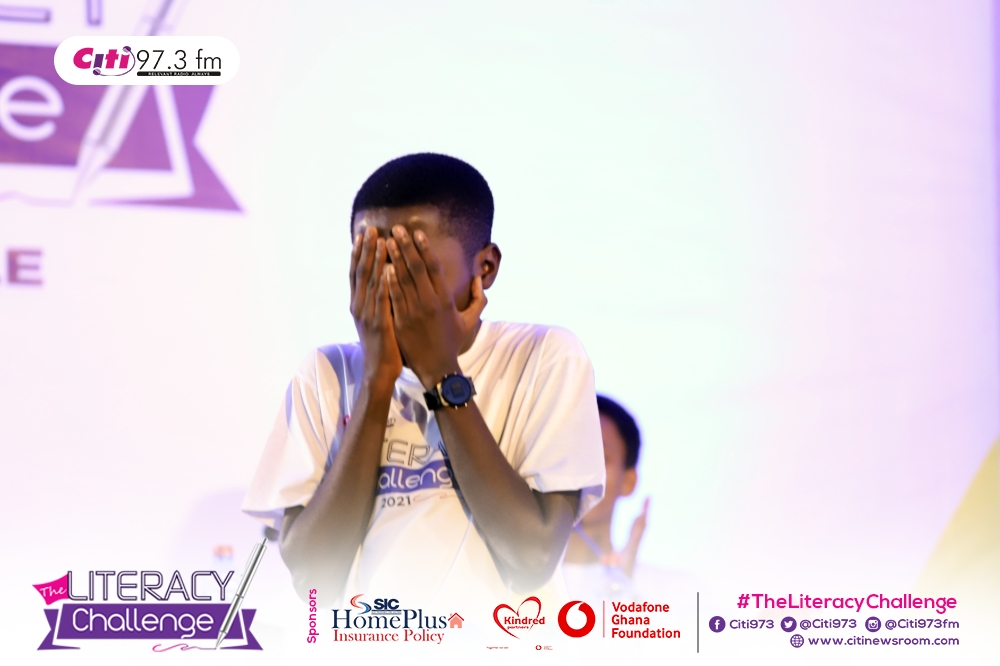 While Abena received GHS 5,000 for placing second, Jayden was also presented with GHS 3,000 for the third position. 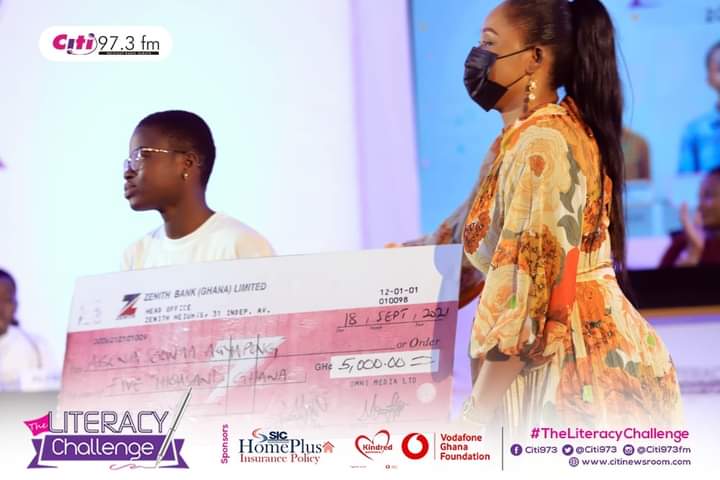 All 10 finalists were given a medal and certificate of participation from Citi FM. 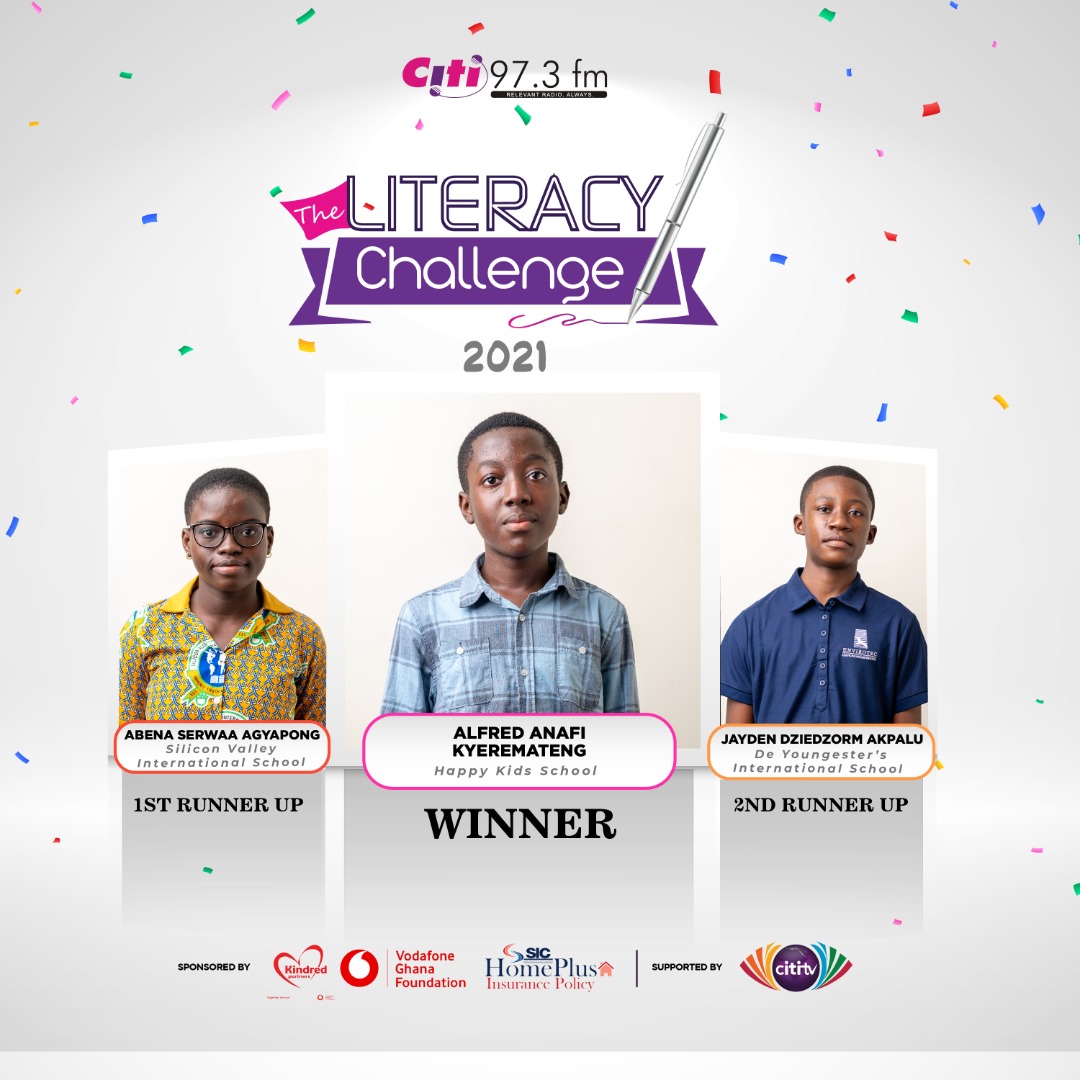 The nine other contestants were given tablets,  MiFi, SIM card, and one month free internet subscription each from the Vodafone Ghana Foundation as well as gift bags from SIC Insurance PLC. 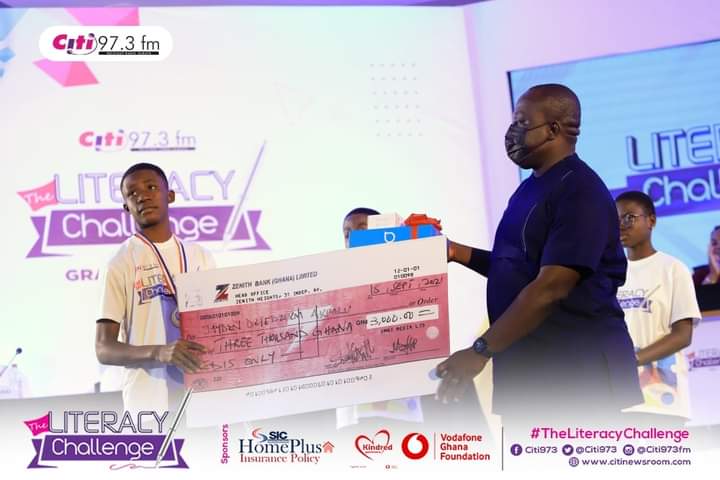 Alfred, was once a participant of Citi TV‘s Best Brain quiz competition. He was part of the team that represented his school from the preliminary rounds through to the finals where they placed second. 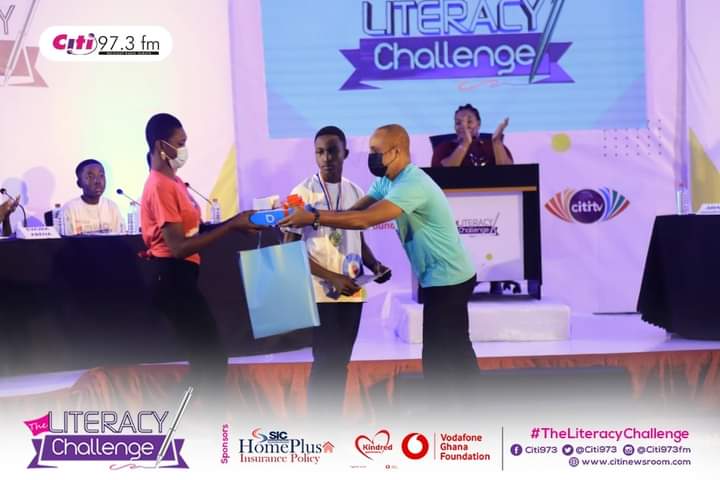 The Literacy Challenge is a three-level, nationwide, contest-style campaign that promotes Literacy in Ghana and which targets Junior High School (JHS) students, in Ghana. 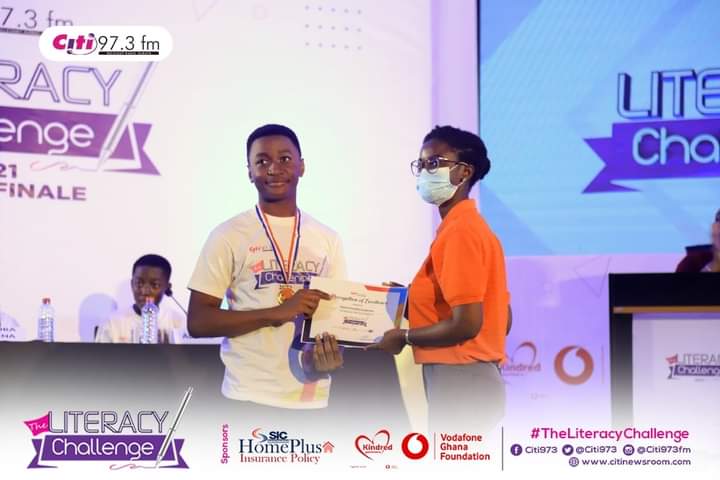 The challenge targets a wide range of audiences and actively engages students from all 16 regions of Ghana. 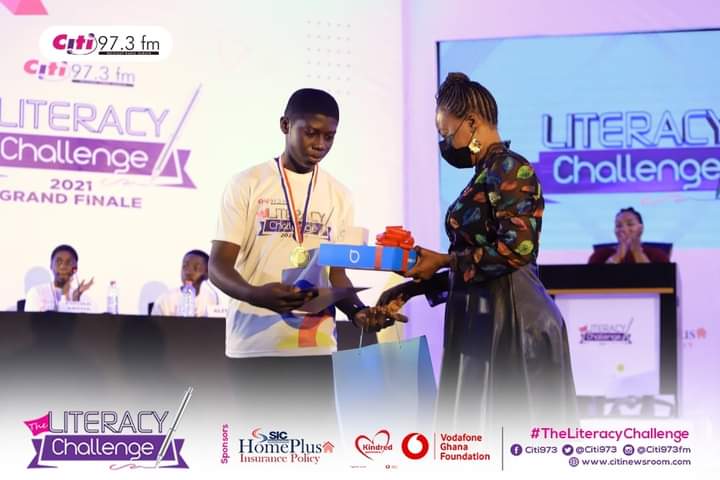 Its three levels of competition challenge participants to do more, beyond just writing.

After having received an overwhelming 2,000 entries, this year, the top 50 contestants from Level I made it to Level II and sat for a written, Aptitude Test, at the Accra Digital Centre, on Saturday, 4th September 2021. 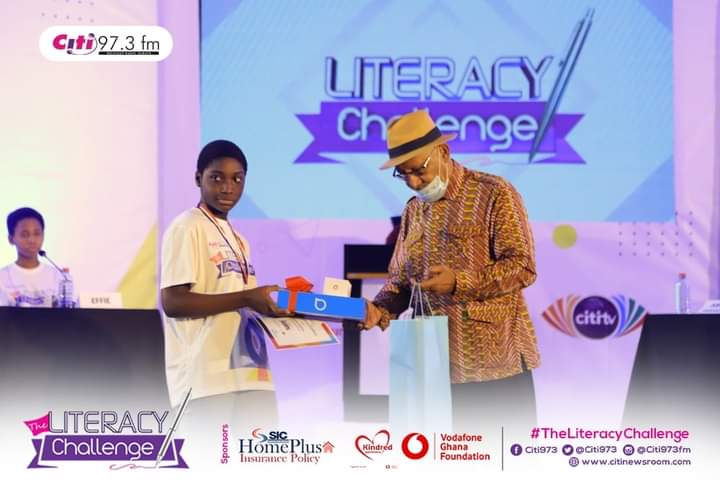 The top 10 contestants from Level II  proceed to Level III (Grand Finale), to compete in the traditional quiz. 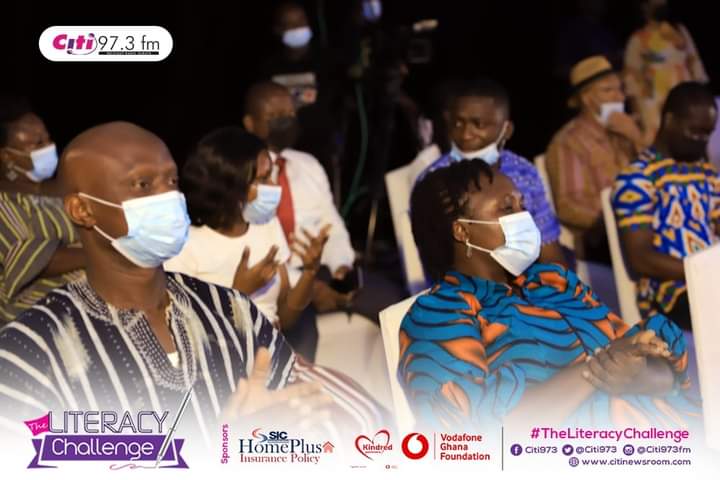 For the 2021 edition of the Literacy Challenge, participants wrote an essay on the topic: “As an aspiring presidential candidate, in not less than 600 words, write a convincing manifesto speech that is intended to fix the country and to bring hope in political governance.”

The competition is powered by 97.3 Citi FM, with support from Citi TV. 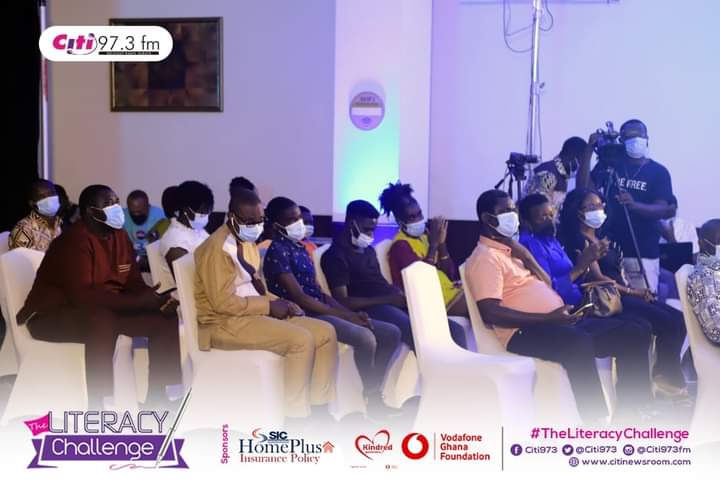 It was sponsored by The Vodafone Ghana Foundation as part of the Kindred Partners and SIC Insurance PLC. 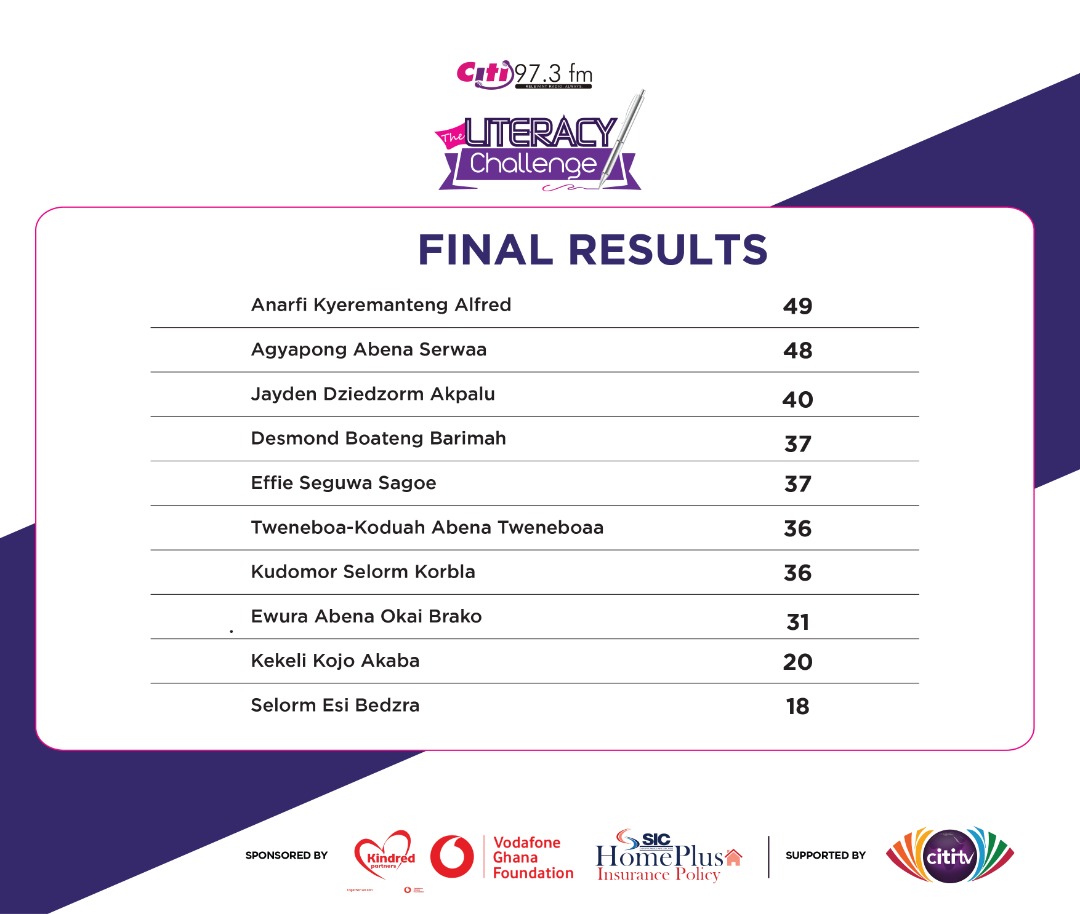