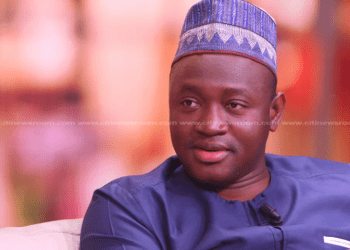 The Member of Parliament for Tamale North constituency, Alhassan Suhuyini, says he does not believe that his advocacy for the anti-LGBTQ+ bill before Parliament is the reason he was denied a visa to the Netherlands.

He said, although he does not fault persons who believe the visa denial is due to his advocacy, the circumstances of him being denied the visa remains curious.

Social media has been buzzing with claims that he has been denied a visa by the Netherlands Embassy in Ghana because he is one of the promoters of the anti-LGBTQI+ bill in the country.

But speaking on Eyewitness News on Friday, the legislator said to the extent that the embassy did not state emphatically that, his anti-LGBTQI advocacy was the reason his visa was denied, he would not want to draw such a conclusion.

“People can be forgiven to think the way they are thinking that this decision by the Netherlands Embassy to deny our application for visa is linked to the promotion that I am associated with to determine whether or not Parliament will pass the promotion of proper human sexual rights and Ghanaian family values bill into law… Personally, I am hesitant to link the decision of the embassy to this exercise… I am hesitant because the correspondence the embassy sent to me in response to the application for a visa did not communicate that,” he said.

Suhuyini however expressed disappointment in the decision of the Embassy, stating that he is surprised that no consideration was given to the fact that he is a Member of Parliament, he has a rich travel record and has never overstayed any visa.

He disclosed that he has appealed the decision of the Embassy and intends to lodge a complaint with the Ministry of Foreign Affairs on the matter, since the Embassy’s decision amounts to an insult to him and the country’s sovereignty.

“[They said] I could not prove enough significant social and economic ties to Ghana in my application, for which reason they were not convinced that I will return after my intended visit. I think it amounts to an insult not only to me as MP but to the sovereignty of Ghana and Ghanaian state officials and diplomats as well. I have appealed this decision and waiting for a reply, after which I will lodge a complaint with our Ministry of Foreign Affairs to determine the next line of action,” he added.