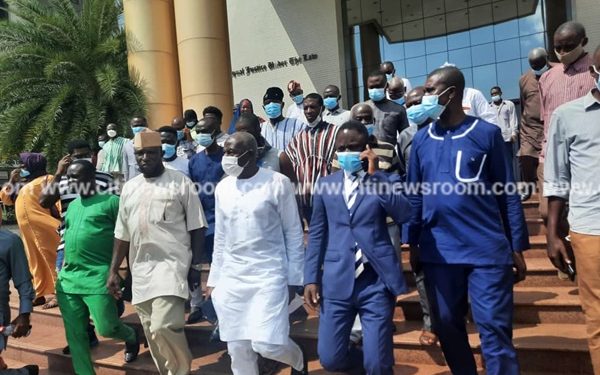 The Criminal Court 2 Division of the Accra High Court has given the State up to six weeks to file its disclosures in the abandoned Saglemi Housing Project trial.

Her ladyship, Elfreda Denkyi ruled in accordance with a prayer made by Chief State Attorney, Evelyn Keelson, to grant the Prosecution time to file the necessary processes.

Former Works and Housing Minister under the Mahama administration, Collins Dauda is standing trial together with four others for allegedly causing financial loss to the State in the controversial housing project.

Minority Spokesperson on Health, Kwabena Mintah Akandoh in an interview after court proceedings, however, accused the State of selectivity in its prosecution of alleged rot in public office.

“I believe that they must hurry up and arraign him so that we will see that we are all treated fairly. But if it is heading t only one direction, that is unfortunate, unfair, and can be best described as witch-hunting. If we are pursuing justice, then the Minister of Health must also appear before court.”

He said he expects the State to prosecute Health Minister, Kwaku Agyeman-Manu in the same spirit, over his handling of the purchase of COVID-19 vaccines at the height of the pandemic.

Mr. Dauda and the four others are facing 52 counts of criminal charges for intentionally misapplying public property, wilfully causing financial loss to the Republic, and dishonestly causing loss to public property.

Alhaji Collins Dauda and his successor Dr. Kwaku Agyeman-Mensah, have been accused of spending over $196 million on the Saglemi housing project when investigations revealed that the cost of works executed on the site, including consultancy services, was about $64,982,900.77.

The third accused person who was a Chief Director at the ministry was also granted bail to the tune of $65 million or its cedi equivalent with three sureties. 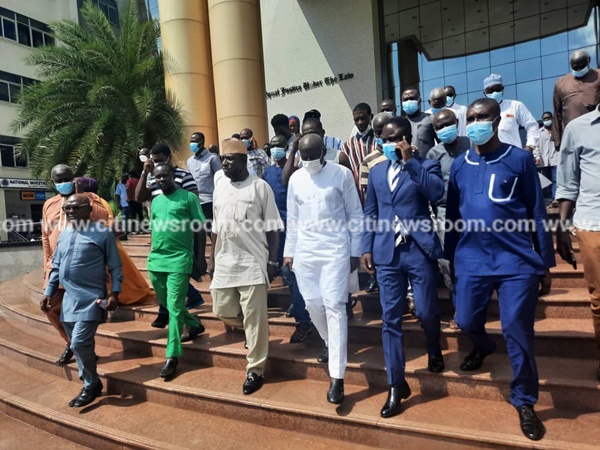 According to the facts of the case presented by the Attorney General, Godfred Dame, an executive order approving the construction of 5,000 affordable housing units, to be known as the Saglemi Affordable Housing Project, was granted by then-President, John Dramani Mahama in August 2012.

The project, which had parliamentary approval, was funded by Credit Suisse, and the housing units were to be sold to workers through mortgage arrangements provided by the then Ghana Home Loans Company. The contractor for the project is a Brazilian company, Construtora OAS Ltd.

In the facts presented to the court, the Ministry of Finance [borrower], and the lender signed a facility agreement on January 4, 2013, for the release of $200 million to fund the construction of the 5,000 housing units, the day on which the Housing Minister also signed the EPC agreement with Construtora OAS, represented by Clocanas, the fourth accused.

According to the AG, the project was to be executed in four phases on 2,172 acres of land at a contract price of $200 million, including consultancy services.

An Escrow Management Agreement, a condition precedent to the release of the facility to the borrower, was also signed, pursuant to the facility and the EPC agreements, he said.

He further stated that on February 27, 2014, Dauda, without parliamentary approval, reviewed the EPC agreement and signed both the original and the revised (restated) agreement with Construtora OAS, represented by Clocanas.

The revision allegedly changed the scope of works and the application of the $200 million approved by Parliament.

This new agreement required the contractor to execute the project in three phases over a site of 1,272 acres, while the $200 million was now to be applied towards the execution of only the first phase of the project, comprising just about 1,502 housing units.

This was contrary to the executive and parliamentary approvals, as well as the facility and Escrow Management agreements.

On December 21, 2016, according to the facts, the Chief Director, Yakubu, again reviewed the original and revised the (restated) agreement and signed them (second and his revised or restated), without recourse to Parliament.

That led to a further reduction in the scope of works to 1,412 housing units at a revised price of $181 million, and extended the completion period to July 31, 2017, the prosecutor alleged.