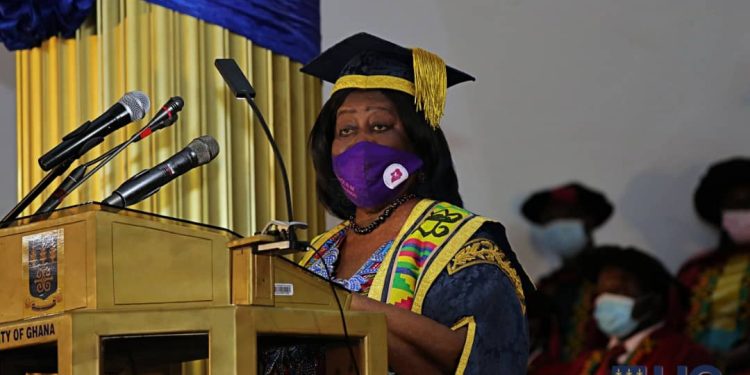 The newly sworn-in Vice-Chancellor (VC) of the University of Ghana, Prof. Nana Aba Appiah Amfo, has been extolled following the office she has been inducted into.

Prof. Appiah Amfo has particularly been described as one who has by virtue of her academic and leadership credentials risen to the role of a Vice-Chancellor and becoming a woman who has “smashed a major glass ceiling”, in the country’s higher education space.

In a welcoming speech during her investiture, Chancellor of the University of Ghana, Mrs. Mary Chinery-Hesse, said the feat achieved by Prof. Appiah Amfo as the first female Vice-Chancellor in the history of the university is admirable and must be greatly celebrated.

“73 years after the establishment of the University, my heart swells with joy and pride that, it is under my Chancellorship that, God has chosen to work his purpose out in such a magnificent manner to give us a first woman Vice-Chancellor.”

“I can assure you that in 1959 when I matriculated at this university, that a woman will be sworn in as a Vice-Chancellor would have been considered far-fetched. Nana Aba, you have smashed a major glass ceiling at no mean institution other than the University of Ghana. Hearty congratulations to you,” Mrs. Chinery-Hesse delightfully praised the newly-inducted VC.

Prof. Nana Aba Appiah Amfo was on Tuesday, October 26, 2021, inducted as the 13th Vice-Chancellor of the University of Ghana.

On her part, Prof. Appiah Amfo was grateful for the honour done to her.

She particularly thanked God and the University Council for seeing to her successful appointment and pledged her commitment to work towards the realization of the university’s mission and vision.

“I am awed by this honour done me by my appointment as the 13th VC of the University of Ghana and the first female to be so appointed. My heart is full of gratitude to God for bringing me this far in life. I am thankful to the Council of the University of Ghana for the demonstration of confidence and trust in me by endorsing the recommendation by the search committee. It’s been a long and circuitous process, but in the midst of this faith refining experience, the overwhelming experience and support from countless people have brought me this far.” 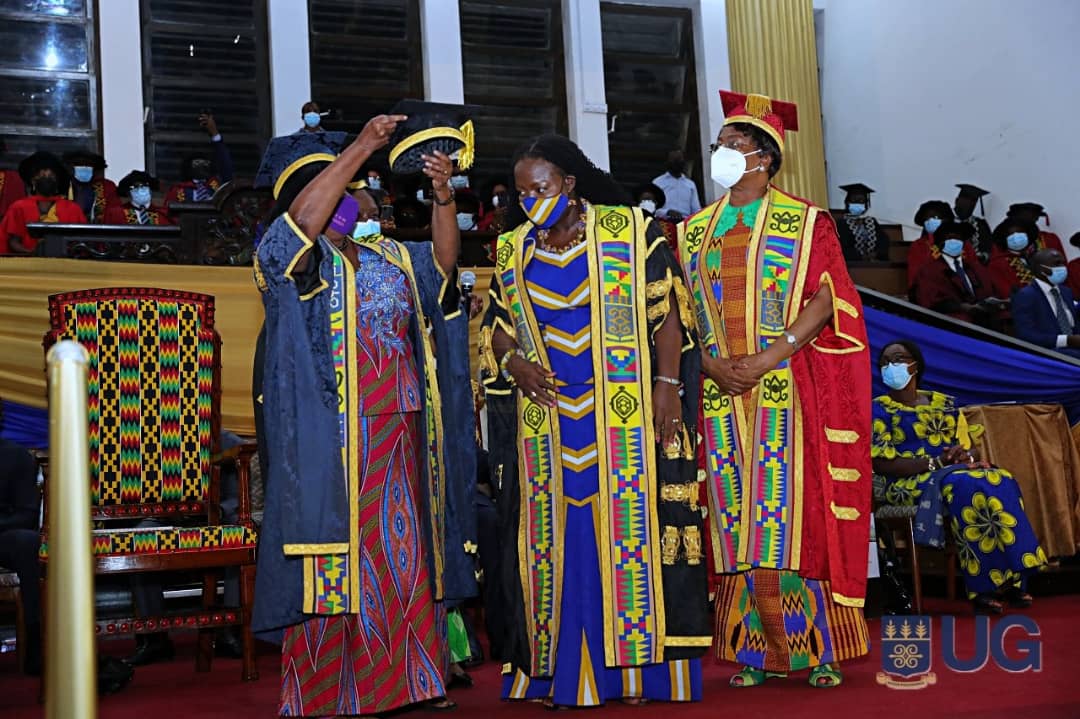 She becomes the first woman to occupy the position in the history of the nation’s premier university, joining the likes of Professor Mrs. Rita Akosua Dickson and Prof. Naana Jane Opoku-Agyemang as the first women to occupy the prestigious position of Vice-Chancellor at the Kwame Nkrumah University of Science and Technology (KNUST), and the University of Cape Coast (UCC) respectively.

Prof. Amfo, aged 50, a professor of Linguistics and former Pro-Vice-Chancellor in charge of Students and Academic Affairs, has been acting in such a position since August 1, 2021.