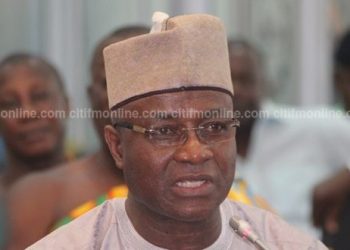 The decision of the Minister of Roads and Highways, Kwasi Amoako-Atta, to order the immediate cessation of the collection of tolls on all public roads was due to chaos at the various toll booths following the announcement by the Finance Minister.

This is according to the Majority Leader, Osei Kyei Mensah-Bonsu.

According to him, the decision of the Minister was to restore order at the toll booths and avoid the exchange of fisticuffs.

The Minister for Finance, Ken Ofori-Atta, during the presentation of the 2022 budget announced the cessation of collection of road tolls in the country.

The Minister said although the government needs to such revenue to fix roads in the country, it has observed that toll booths are doing more harm than good, causing heavy traffic and impacting negatively on productivity.

Following the announcement, the Minister for Roads and Highways, Kwasi Amoako-Atta issued a directive for the collection of tolls on public roads to be immediately stopped, but Parliament on Thursday took issue with the directive.

The Speaker of Parliament, Alban Bagbin explained that the instruction by the Roads Minister was illegal and must be immediately withdrawn.

He said until then, the Minister had no right or legal basis to issue directives for road tolls, which are a source of government revenue approved by Parliament, to be stopped.

“It is a proposal they [government] are presenting to us for us to approve, and it takes effect on January 1, 2022, to December 31, 2022… Until this budget is approved, all what is contained in the budget are proposals. We have the authority to approve it… Until that has been approved, nobody has the authority to start implementing something that does not exist,” he said.

“That really is what happened. The Minister wanted to save the situation. As to whether it conforms with legality, that is another matter, but the Minister acted timeously to save lives and property. That is why the directive was not about the suspension of the law, he only dealt with the operationalization of the law in place, so Mr. Speaker, if the house has questions to ask, perhaps we may want to invite the Minister to provide us with further and better particulars about the directives he issued,” he explained.

Bank transfers will not be affected by e-levy – Adu-Boahen