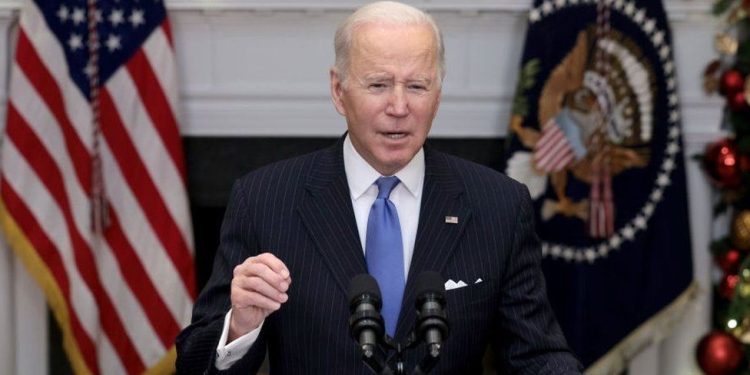 US President Joe Biden has called the Omicron Covid variant a “cause for concern, not a cause for panic” one day after it was detected in North America.

He said he saw no need for a lockdown “for now”, adding, “if people are vaccinated and wear their masks”.

Cases have been found in Canada, and the US has imposed travel bans on eight African countries.

Despite vaccines and Mr Biden’s vow to “shut down” the virus, more Americans died this year from Covid than last.

At the White House on Monday, the president called it “almost inevitable” that the Omicron strain, first reported by South Africa, will be found in the US “at some point”.

He added that vaccine companies are creating “contingency plans” for new vaccines “if needed”.

Late last week, the US announced a ban on flights from South Africa, Botswana, Zimbabwe, Namibia, Lesotho, Eswatini, Mozambique and Malawi. Canada, the UK and the EU and other countries have also restricted travel from southern Africa.

Canada, the US neighbour to the north, said on Sunday that the Omicron strain had been discovered in two patients who had recently travelled to Nigeria. A third case was announced on Monday.

Mr Biden said that the ban had bought some time for the US to study the new strain. While the World Health Organization has deemed Omicron a “variant of concern”, it is still not clear whether it is associated with more transmission or more risk of evading vaccines.

Critics noted that Mr Biden accused former President Donald Trump of “hysterical xenophobia” after he limited travel from China in January 2020 as the coronavirus spread in the US.

Florida, which has taken steps to ban Covid-19 vaccine and mask mandates, currently has one of the lowest rates of coronavirus transmission out of all 50 states in the US, according to the US Centers for Disease Control and Prevention.

While Mr Biden once again urged Americans on Monday to wear masks, he has come under fire for flouting his own rules.

He was pictured without a mask covering his face over the Thanksgiving weekend where he stayed in Nantucket, Massachusetts – at one point inside a shop that had a sign on the window requiring customers to wear face coverings.

First Lady Jill Biden was also criticised online on Monday as she appeared in the White House without a mask, reading to a group of schoolchildren who were all masked and socially distanced.

Earlier on Monday, a federal judge blocked the Biden administration from enforcing a coronavirus vaccine mandate on thousands of healthcare workers in 10 states.

The judge wrote that government officials had probably overstepped their legal powers.

Another federal court earlier this month put a hold on a separate rule requiring businesses with more than 100 employees to ensure their workers get vaccinated.

Tollbooth workers to demonstrate today after being rendered redundant