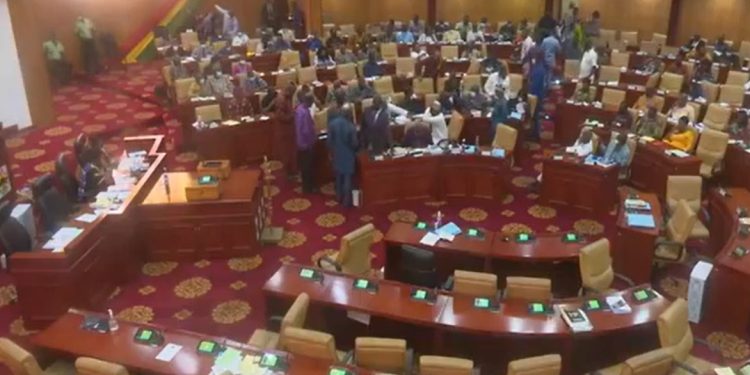 Members on the Majority side of Parliament staged a walkout during processes to approve the 2022 budget in the House on Friday, November 26, 2021.

This follows a disagreement over a directive by the Speaker of Parliament, Alban Bagbin, for non-MPs to vacate the Chamber.

Deputy Majority Leader, Alexander Afenyo-Markin, challenged the Speaker’s interpretation of the voice vote and called for a ‘division’.

Mr. Bagbin thus directed that, per orders of the House, non-MPs had to vacate the Chamber during the voice division process.

This infuriated the Majority MPs, who walked out of the Chamber, leaving only members on the Minority side.

Parliament was to conclude the debate on the 2022 budget statement and approve the policy document today.

Earlier in the day, the Speaker of Parliament suspended proceedings in the House for 30 minutes, following the absence of the Majority MPs.

Although sitting was to begin at 10:00 am, the Majority of MPs failed to show up on time.

When the Speaker entered the Chamber around midday on Friday, November 26, 2021, the Minority MPs had filled the House, but the Majority side of the aisle was completely empty.

The Speaker decided to suspend sitting after the Deputy Minority Whip, Ibrahim Ahmed, raised the issue of the absence of the Majority Leadership in the House even though they were together in a meeting within the precincts of Parliament.