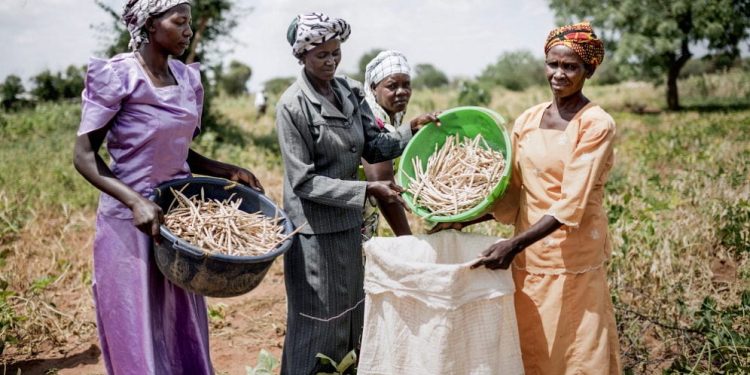 Cowpea seed growers in the Northern and Upper East regions of Ghana have urged the government to expedite processes to ensure they start using genetically modified (GM) cowpea seeds.

“Delays in releasing this GM cowpea variety to us for commercial production by the relevant state institutions is a deliberate plan to impoverish us,” they said in a statement.

According to them, “Nigeria has commercialized this same variety and that their farmers are currently growing it.”

“Already, they and other neighbouring countries have a higher share in our cowpea market. Very soon they will export grains of this very easy to grow cowpea variety to our market, and we will be less competitive because the price of their cowpea will be lower than ours,” they warned further.

The farmers have thus called on the Ministers at the Ministry of Food and Agriculture and Ministry of Environment Science Technology and Innovation “to be forward-looking and support the government institution (CSIR) that is working to ensure appropriate GM seeds are commercialized for farmers”.

We, the cowpea seed growers of the Northern and Upper East regions of Ghana, are hereby gathered here today as important stakeholders in the agricultural sub-sector and to express our worry about delays in addressing a very huge challenge confronting cowpea farmers in Ghana. This is the issue of challenges with getting healthy seeds for our farmers. As a result of this challenge, our dear country relies on imports from neighbouring countries to meet consumption demands. It is a fact that Ghana produces only 57,000 tons of cowpea annually, although our estimated annual demand is approximately 169,000 tons. The deficit is catered for by imports from other West African countries, notably Burkina Faso, Nigeria and Niger. No wonder delicacies made from cowpea such as ‘red – red’, ‘wakye’ and ‘koose’ are expensive these days.

We wish to state that the main enemy of cowpea farmers which has resulted in very low yields of the crop is the attacks by insect pests at all growth stages. We, as farmers spend heavily on insecticides to enable us protect our crops from damage by these pests. Apart from the cost of the insecticides, we spend on labour to spray our farms almost fortnightly. These increase our cost of production. Our health as farmers and that of our workers keep deteriorating because of the repeated exposure to harmful chemicals. Even the health of the consumers of our grains can be badly affected in situations where preharvest intervals are not adhered to as a farm practice. After the many insecticide spray applications on our farms, we are still not able to harvest up to 1 ton of cowpea per hectare. Hence, making the price of cowpea grains on the market very expensive compared to cereals and other food crops.

We were relieved and excited to hear and see during field days at CSIR – SARI that a new GM cowpea variety resistant to the pest scientists call Maruca pod borer has been developed. This pest destroys up to 80% of our crops. We were even happier to know that we do not need to spray our cowpea fields more than twice in a season when this variety is grown. However, we were disappointed to be told that we cannot have seeds of the GM cowpea variety with desirable characteristics because the developers (i.e., CSIR – SARI) have not been permitted by law to release it to farmers.

We wish to explicitly state that;

Technology is evolving quickly and we the Seeds Producers from Northern and Upper East regions are aware that the development of GM seeds for farmers does not mean that conventional varieties would not be developed. The two techniques can be used to develop seeds side by side and it affords our gallant farmers options to choose which versions/varieties they want to plant.

The ECOWAS region is moving towards a free trade regime which would see the potential movement of goods freely including GM seeds and food from Nigeria to Ghana. Ghana should therefore position itself to take advantage and produce our own needed GM versions of seed to prevent smuggling because the GM varieties will perform better than the conventional seed varieties of cowpea we have in Ghana.

We are therefore calling on the Ministers at the Ministry of Food and Agriculture and Ministry of Environment Science Technology and Innovation to be forward-looking and support the government institution (CSIR) that is working to ensure appropriate GM seeds are commercialized for farmers. We are calling on the Ministers to allow the technology to thrive and let the farmers of Ghana decide which of the varieties we want to plant.

We are also calling on the Biosafety Authority, to be up and doing, to ensure the farmers of Ghana have GM cowpea in their hands. This will bring hope and transformation to farmers in Ghana, as is the case now in Nigeria.

In conclusion, we challenge anyone who has contrary scientific evidence on the GM Cowpea, to come out and disprove our scientists who have worked on this seed. We congratulate our gallant scientists in the country for been allies to our profession as farmers and helping us develop the agriculture sector in our country. Long Live Cowpea Growers! Long live Agriculture! Long live Ghana!