Three Members of Parliament are set to file a private member’s bill seeking to address challenges associated with legal education in Ghana.

A memo from the three MPs said the bill is expected to bridge gaps in the “current legal and regulatory framework by providing for critical aspects of legal education that remain either partially regulated or wholly regulated.”

The MPs in their bill are recommending the decoupling of the administration and regulation of legal education from that of the legal profession.

They are calling for the establishment of a Council for Legal Education and Training, which shall “be in charge of legal education in the Republic.”

“The Council shall be a body corporate with perpetual succession and a common seal and shall, in its corporate name, be capable of suing and be sued, acquiring and disposing of property and performing any other acts that a body corporate can perform under the Companies Act, 2019 (Act 992) in furtherance of its purpose,” a portion of the proposed bill said. 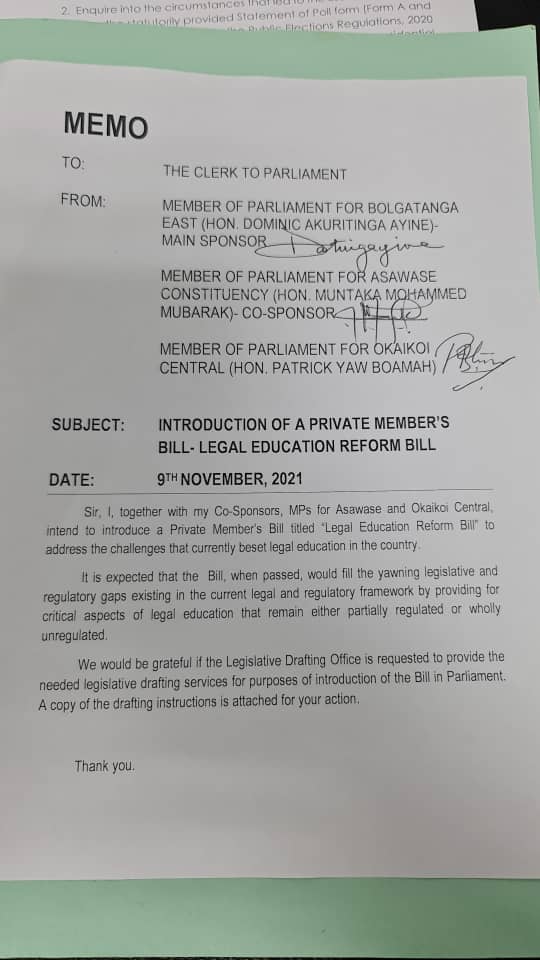 This motion follows the General Legal Council’s (GLC) decision to admit some 499 law students who were denied entry into the Ghana School of Law.

After protests from the students, including a lawsuit, the Attorney General recommended that the GLC admits the students.

The Attorney General was particularly criticized by many for suggesting that law practice is a privilege and not a right.

Coincidentally, the Attorney General and Minister of Justice, Godfred Dame, has also proposed an amendment to the Legal Professions Act to provide a framework for the licensing of universities to run Bachelor of Laws programmes.

The Bill noted that there are currently no modalities under which such approval is to be given by the General Legal Council, and “this has resulted in the establishment of different law faculties in various universities with wide and differential standards in teaching and infrastructure.”

It is expected to sanitise universities offering the Bachelor of Laws programme “and provide for a standardised way of monitoring these institutions to ensure optimum performance.”

“This will also improve on the quality of Bachelor of Laws graduands from these universities and with time, make their entry into Professional Law Course programme more seamless and effortless,” the draft Bill added.

Students accused of lesbianism not sacked from hostel – UPSA Management

Students accused of lesbianism not sacked from hostel - UPSA Management