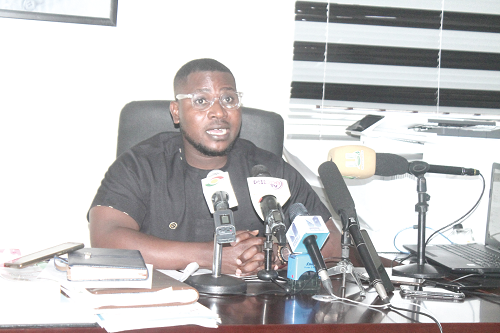 Victor Adawudu, the lawyer for beleaguered Executive Director of anti-corruption and social advocacy group, the Alliance for Social Equity and Public Accountability (ASEPA), Mensah Thompson, says the decision of the police to charge his client over the publication of false news is problematic.

The lawyer argues that, since his client has shown remorse and apologized for misleading the public, the case should have rather been pursued in a civil manner.

Speaking on Eyewitness News, moments after Mensah Thompson was detained after honouring an invitation by the police, Victor Adawudu insisted that the officers’ handling of the case is unfair.

“The police invited us, we went, wrote our statement and after that, the officers said they will detain him. He has been charged with the publication of false news, and the punishment for that is a misdemeanour. It baffles us because in all honestly, a civil society organization has information and puts it out in the interest of the public and realized that the source is not credible and comes back and apologizes, and that becomes a criminal offence or a crime… I am sure when we get to the court, the judge will determine the matter.”

He likened the situation to where the constitution gives rights to journalists to issue rejoinders after the publication of inaccurate news items, suggesting that the best charge should have been defamation if the defendants felt their image have been destroyed with malicious intent.

“The remedy the law gives people whose image have been injured is defamation, which is a civil matter or a right to rejoinder which is guaranteed by the constitution. Seeing this as a criminal matter is a source of worry because those democratic rights of holding people in society accountable will be eroding because we are now saying if you speak and get it wrong from your sources and apologize, it becomes a criminal matter,” Mr. Adawudu lamented.

Police say a formal complaint was brought against Mr. Thompson by the Ghana Armed Forces regarding allegations that members of the president’s family travelled on the presidential jet to the UK for shopping.

He is expected to be arraigned today, Thursday, February 10, 2022, at the Kaneshie District Court.

Mensah Thompson, who leads ASEPA as an anti-graft and social advocacy group, had alleged that that President Nana Addo Dankwa Akufo-Addo together with his relatives used the Presidential aircraft of Ghana Armed Forces for a shopping trip to the United Kingdom in December 2021.

That was not his only claim; he alleged that the trip between December 20 to 30 was also joined by the president’s friends.

He thus demanded explanations from the National Security, Ghana Armed Forces and the Defense Ministry over the use of the presidential jet.

But the Ghana Armed Forces debunked the claims, discredited the reportage and asked the public to disregard it.

Mensah Thompson subsequently backtracked on his claims and rendered an unqualified apology for peddling the baseless claims.

“In the same medium I made the earlier publication, I withdraw the publication pending an official response from the GCAA. I unreservedly apologize to the Ghana Armed Forces if their image was in any way affected by my publication. We shall put out for your consumption the response to our request from the GCAA records of the Falcon 900-EX,” he posted on social media.