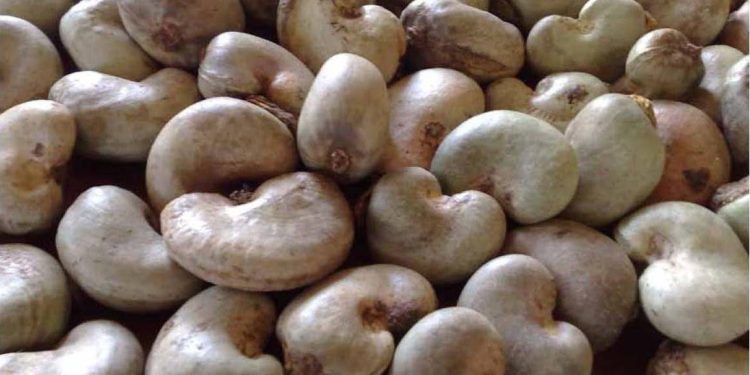 Despite being the world’s largest producer of raw cashew nuts (RCNs), Africa’s share of the kernel market has remained within a single-digit percentage due to the low rate of local processing in the continent, which remains less than 10%.

Though Africa’s share of the major cashew markets remained low despite the continent producing almost 60% of global cashew in 2021, a cashew expert and consultant with the ACA, Jim Fitzpatrick, who presented these statistics at the maiden section of the ACA’s Global Market Encounter (GME) in 2022 held virtually on Wednesday, March 2, believes an 11% share of Europe’s market is progress and will improve with time. He highlighted that the increase in the market share is a result of an increase in local cashew processing in Africa, though still very low.

Another important contributing factor to the increase in Africa’s share of the market is that there has been a general improvement in food safety, traceability, and transparency in cashew processing in Africa. Through consistent sensitization and technical support from organisations and projects, local processors have become more attentive to following international cashew processing guidelines. The ACA Seal, an industry mark that represents compliance with international quality, food safety, and labour standards, is, for instance, ensuring that processors follow the right processing procedures.

With recognition by many international cashew buying organisations, including Intersnack, Caro nuts, OLAM, and Red River Foods, who are committed to buying ACA Seal approved kernels, African cashew kernels have gained acceptance and credibility in terms of food safety and quality in international markets.

For a continent that produces more than half of global cashews, Fadel believes its share of the kernel market must improve. This means Africa must increase its local processing rate, and this requires collective actions from both the governments and the private sectors. There need to be a deliberate policy on the part of governments to encourage local processing in the various cashew producing countries. The right conditions should be created for investors to go into cashew processing and for the existing factories to process to capacity. Local banks need to support local processors with loans at reasonable interests and terms, Fadel highlighted.

Demand and consumption of cashew

Generally, demand for cashew in the major cashew consumption countries remained positive in 2021.

From a drop-in cashew consumption due to the impact of the pandemic which disrupted processing and affected consumption in the past two years, India, the greatest cashew consumer in the world, increased its cashew consumption by 10% in 2021, from around 275,000 tons to an estimated 290,000 tons. Though this is a clear indication that the Indian kernel market is recovering to the pre-covid era, particularly in 2019 where India’s consumption reached about 320,000 tons, an analysis of growth rate in a 10-year period shows that consumption growth in 2021 was 4% and below the average growth rate of 7% up to 2019, Jim analysed. He was however optimistic that with the gradual easing of COVID-19 restrictions in the Asian country, chances are high that cashew consumption will recover fully in 2022.

The United States, the largest import market for cashew in the world, ended 2020 with an incredible cashew import growth of 8%, the highest in ten years. This positive trend continued in 2021 as demand and consumption of cashew increased by 9.5%. Jim expects cashew demand to remain strong in the US in 2022.

In China, demand and consumption of cashew also increased by 7.5%, with 85,000 tons of imports, according to Vietnamese export figures, and an annual growth rate of 12% in a ten-year period. Though China is not yet a giant market in the cashew industry, Jim believes it is a big market with a bigger potential to grow.

Generally, with the positive consumer trends on the market, low level of prices and the lifting of COVID-19 restrictions, especially in India, Jim expects demand for cashew to remain strong and recover to the average pre-Covid rate.

“Overall, we expect in 2022 that consumption will turn back to the average. So, that means it will be positive in most of the markets. If we look at the market in general, we see very positive growth in the consumption of cashews worldwide,” Jim said.

While Africa looks to increase its share of the international kernel market, it is important for local processors to develop the local markets. Africa consumes an insignificant percentage of global cashew. This is due to several factors, including lack of proper understanding of the health benefits of consuming cashew, poor marketing strategies on the part of local processors, and high prices of cashew. There is a need for proper media sensitisation on the health benefits of consuming cashew, and to debunk the many misconceptions about consuming cashew. Local processors should adopt strategic marketing methods to attract more local cashew consumers.

Africa remained the highest producer of global raw cashew nuts in 2021, producing over 60% of the world’s cashews. West Africa produced about 1.8 million tons, representing 50% of global cashew, while East Africa produced 11%. The major highlight of 2021 cashew production was that Cote d’Ivoire recorded its highest ever RCN production, producing more than 1 million tons, remaining the largest producer in the world. Nigeria’s production in 2021 was estimated to be around 220,000 tons, while Guinea-Bissau produced around 230,000 tons of RCNs.

Following the establishment of the Tree Crops Development Authority to regulate cashew and other three crop sectors in Ghana, cashew production in the country saw a slight increase and was around 120,000 tons while West African counterparts, Benin, produced around 130,000 tons of RCNs in 2021.

Quality-wise, crops from Africa were generally good in 2021.

Generally, global RCN production is expected to remain strong, between 3.8 million and 4.3 million tons in 2022. This is expected to be driven mainly by Cambodia and India, which are expected to recover from the COVID-19 impacts on production, according to Jim Fitzpatrick.

Cashew processing remained highly concentrated in Asia in 2021, where 90% of global cashews are processed. Vietnam remains the largest cashew processing country in the world, processing over 80% of the world’s cashew. Despite making some progress, especially in Cote d’Ivoire, cashew processing in Africa remains less than 10%. This could increase in 2022 as countries continue to put measures in place to encourage local processing, and through the support of development partners.