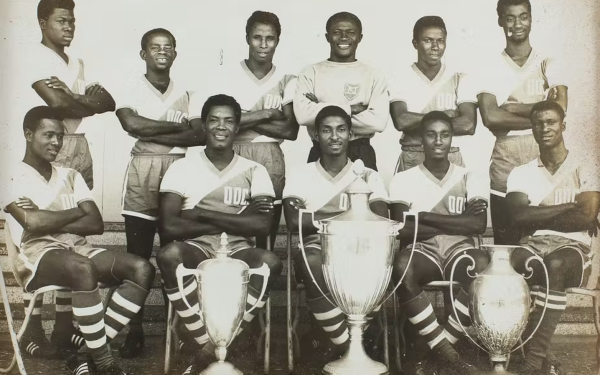 African footballers have been migrating overseas since the 1920s, when French leagues attracted some West African players. The migration of African talent to Europe intensified from the 1980s to the 2000s as football became more globalised and economically viable.

Thousands of African footballers have since found their way to Europe. Many have succeeded in carving a niche for themselves, like Abedi Pele, Didier Drogba, George Weah and Samuel Eto’o. The performances of these stars have reinforced the perception that the African continent has some of the best football talent.

Less is known about the history of African footballers moving to North America. My own study of the migration of Ghanaians to leagues in the United States from 1967 to 1984 shows interesting connections between political, social, and economic influences and sports. In particular, it highlights the influence of the country’s first post-independence president, Kwame Nkrumah, on the state of football in Ghana.

The knowledge and experience of former footballers is a useful resource for those who wish to promote the game and support the development of players.

The research used a qualitative research method. We tracked down several players who played under Nkrumah’s regime and migrated to the United States to join the North American Soccer League. We also studied documents.

He did this successfully as Ghana’s national football team became the best on the continent, winning two continental titles in 1963 and 1965 . Domestic club sides like Asante Kotoko were also a force.

The popularity of football in Ghana brought enormous prestige, social respectability, and fame to football stars, especially to national team players. They were seen as international stars and were the “pampered darlings” of the general public. Former national goalkeeper Dodoo Ankrah described the feeling.

“We were proud of wearing the national colours because it was not easy to be invited to play for the team … anybody who plays for the national team was regarded as a hero and even the chief in the community takes you as a hero.”

By 1968, two years after Nkrumah’s overthrow, the country experienced an economic crisis which affected sports development. Unemployment increased and social welfare was drastically reduced, making Ghana unattractive to foreigners and citizens alike. The country experienced a long period of economic difficulty, political instability and civil unrest. Conditions became counter-productive to the growth of football and national team players were left to find their own way of surviving.

Some players embraced migration opportunities to the North American Soccer
League, where they met other African footballers.

A number of factors led to the American league becoming the destination of choice for the players at the time. With the economic situation in Ghana showing no signs of improvement and football no longer the focus of attention for the new government, these players felt the need to look for greener pastures. The USA made sense as a destination because most of them had friends who had migrated there. The burgeoning football market was also a factor.

Footballers relied heavily on their social relations and networks acquired through fame and social status. One of them, Wilberforce Mfum, recapped his journey to the United States via Italy, where a former management member of Asante Kotoko SC – who was then an ambassador – hosted him.

This player explained the circumstances surrounding his migration after Nkrumah’s topple. At age 29, Mfum was still scoring goals in African competitions but the media put pressure on “ageing” national team players, leading to their exit.

He told of his final move to the North American league:

“I left Ghana on July 24, 1968. That time, we had played a match against Morocco’s national team for a World Cup qualifier and we lost 0–1 at Accra Sport Stadium, so other sportswriters including Kofi Badu were saying the Black Stars players are old so we should be sacked from the team. I was so lucky that three days after that match, I flew to the United States and was met by Boye Lomotey(a Ghanaian resident in the states) at the New York airport and he took me to Washington.

Most Ghanaian players played for Rochester Lancers Club between 1970 and 1978. Out of the total, only four were former Black Stars players. Others were Wilberforce Mfum, Abdul Razak and Frank Odoi, a former player of Great Olympics, who stayed 12 years in the North American Soccer League. They all enjoyed a reasonable level of success during their playing career in the United States. Back home, football went through an intermittent period of success but the focus that Nkrumah placed on the national team was not replicated.

The study of the migration of some of Ghana’s biggest football stars to the US after the overthrow of Kwame Nkrumah in 1966 adds to the literature on African football migration. This process continues today in the steady flow of football talents to the Major Soccer League in the US.