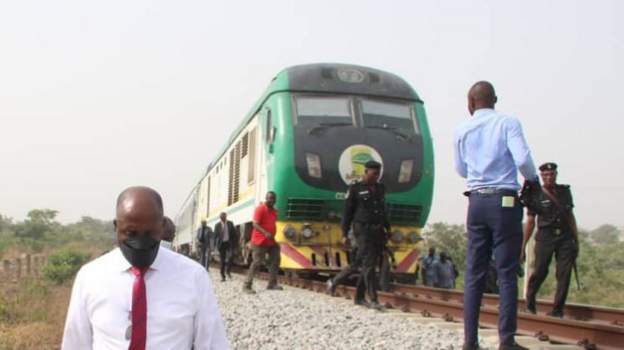 Military aircraft are to escort passenger trains along the vital rail link between Nigeria’s capital, Abuja, and the northern city of Kaduna.

The announcement by Transport Minister Rotimi Amaechi comes after a packed train with commuters was attacked by gunmen on the high-speed line on Monday.

At least eight passengers were killed and several others taken hostage for ransom.

Mr Amaechi said once repair work on the 190km (120-mile) track was completed, the service would resume with aerial security.

This is seen by some as a desperate move by the government, which has been struggling to tackle armed gangs who run huge money-making kidnapping operations.

Locally known as bandits, the sophisticated criminal networks operate across large swathes of the country.

They have made the Abuja-Kaduna highway one of the most dangerous roads in the country, ambushing vehicles at several points along the expressway.

This pushed many commuters to opt for the more expensive rail link, which opened in 2016 and was considered a safer journey until Monday’s attack.

It takes two hours to make the journey by rail, the trains have armed guards and are used by thousands of commuters every day.

The transport minister said the air force would help out with escorts until an “integrated security surveillance and solution for the rail line is implemented’’.

Earlier, Mr Amaechi reportedly complained that plans by his ministry to acquire security equipment for the train services had been blocked within the government.