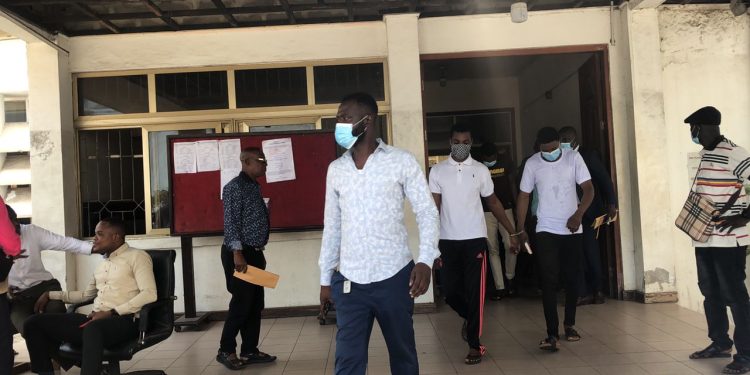 The Accra Circuit Court 11 has for the third time denied bail to the four accused police officers standing trial for their alleged involvement in bullion van robberies in Accra, but discharged a civilian alleged to be complicit in the case.

The suspects were arrested by the police upon an intelligence-led operation at their hideout at Borteyman in Ashaiman.

The four, who are standing trial, had earlier been denied bail following calls by the prosecutor in the case to remand the suspects to allow for further investigations.

During the hearing on Tuesday, the lawyer for the suspects prayed the court to grant the accused bail, explaining that they were police officers who are known by the service and cannot abscond.

The defense lawyer further said there’s no substantial evidence against the accused officers, and that they are not flight risks.

However, the prosecutor, Sylvester Asare, vehemently opposed the prayer and called for the suspects to be remanded.

Giving her ruling on the bail application, Justice Patricia Amponsah said the counsel for the accused didn’t have enough reasons for the suspects to be granted bail.

The four suspects have thus been remanded into police custody and are to reappear in court on April 25, 2022.

Their arrest was part of the police’s special operation into recent incidents of bullion van robberies in the country.

Two police officers who were earlier arrested in connection with the investigation are said to have died in a shoot-out when they led the police to another hideout of criminals involved in the crime.