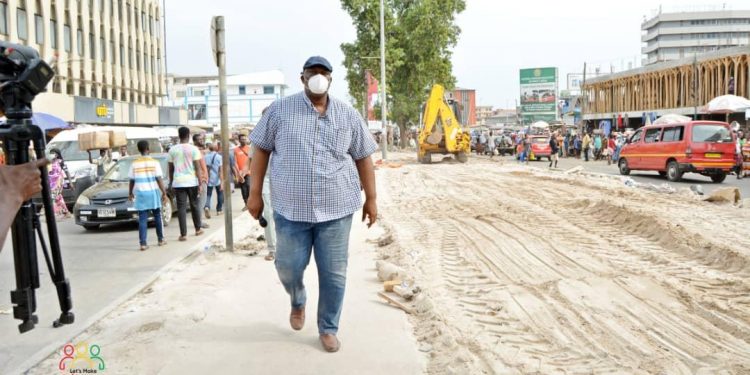 The Greater Accra Regional Minister, Henry Quartey, says recalcitrant traders who operate along the streets of the Central Business District and other key areas of the city would be arrested and prosecuted after the Easter festivities.

According to the Minister, 1,000 members of a taskforce would be deployed to the capital to ensure compliance with the sanitation by-laws and also prevent trading along the streets.

Addressing the media on April 14, 2022, Henry Quartey advised traders along the streets to move into the markets after the festivities or have themselves to blame.

He further stated that awareness has been raised extensively after the launch of “Operation Clean Your Frontage,” where traders who operate along the streets of the Central Business Districts have been spoken to.

“We want to send a strong signal to them that after the Easter holidays, anybody found selling along the streets will be arrested and prosecuted. The trained 1000 men who have passed out of the training with the military will be deployed from next week to enforce these by-laws. The traders should move into the markets for their trade.”

The Minister said he is bent on ensuring that “Accra works” again.

About a thousand members of a city response team are expected to be deployed to the Central Business District and other key areas of Accra to enforce the sanitation by-laws under the Operation Clean Your Frontage program from next week.

The policy was rolled out in February 2022 with the aim of making it obligatory for individuals and corporate entities to be responsible for the cleanliness of their immediate surroundings.

Speaking to journalists on Wednesday, the Greater Accra Regional Minister, Henry Quartey said members of the taskforce have been adequately trained for the sustainability of the exercise.

“We have teamed up with the Ghana Armed Forces, and have trained about 1,000 men to be deployed to help implement the sanitation by-laws across the region. We are hoping to organize a passing out ceremony for them, and given uniforms to go into the region to enforce the laws.”