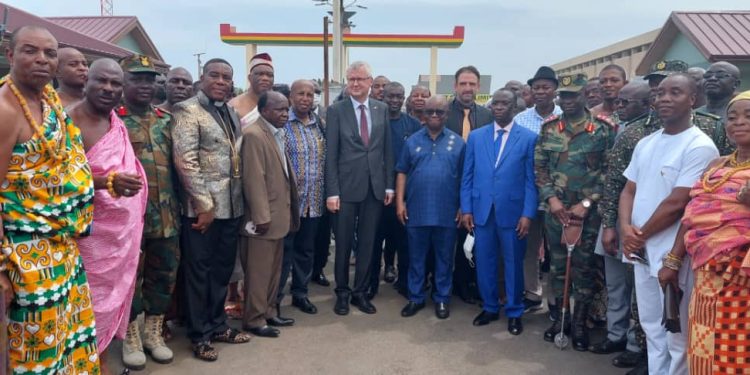 A collaborative effort led by the Ghana Boundary Commission and its counterparts from Togo is ensuring a common objective of a fair re-demarcation and reaffirmation of existing boundaries between both countries.

The project which is funded with 70 million Euros from the GIZ-African Union Border Programme is expected to construct land boundary terminus i.e., Pillar one, thus a unique monument to terminate at the Aflao border and several other pillars along a 40-kilometre stretch.

This is expected to be done with sensitization and education of residents living in communities along the Ghana-Togo borderlines to ensure the new pillars are well protected.

According to Major General Emmanuel Kotia, Chief Executive officer of the Commission, boundary re-demarcation and re-affirmation are very essential and the cooperation of stakeholders is required.

Major General Kotia said despite challenges confronting their operations, they are receiving positive responses from the Boundary Commission of their counterparts in Togo. He is hopeful the objective will be achieved.

“We are reaffirming some land boundary issues between Ghana and Togo. We have started the reconstruction of the main boundary pillars. That is going to be completed by 31st May, and it’s being sponsored by the Africa Union Border Boundary Program. There are a number of challenges. During our inspection, we realized that a number of the boundary pillars have been removed. It can be intentional, but in most cases, it is done by human activities.”

He assured that, the exercise will not in any way break the cordial relationship that exists between both countries.

The Volta Regional Minister, Dr. Archibald Letsa, indicated that, government is guarding against any insecurity and extremism as it takes steps to reaffirm its boundaries.

This, he noted is dear to the government’s commitment to protecting its land borders.

The Ambassador of the Embassy of the Federal Republic of Germany to Ghana, Daniel Krull, and the Head of Programme Support to the African Union Border Programme, Esayas Abebe in their address explained that, the German government is contributing to these efforts in order to avert any existential conflicts in the near future.

“Unclear demarcations of borders are a source for conflict and for us, our support is geared towards conflict prevention,” Krull said.

The Member of Parliament for the Ketu South Constituency, Abla Dzifa Gomashie, noted that, the coordinator for the Ghana Boundary Commission has allayed her fears with his explanation of the project.

The project is expected to commence alongside stakeholder engagement until the first phase of the project is completed by May 29th, 2022.

An eight-member joint committee has been constituted to spearhead the project from start to finish and also address any pertinent issues that may arise.

The Ghana Boundary Commission (GBC) has initiated moves to resolve all boundary disputes with neighbouring Togo and Burkina-Faso.

The intervention has led to a temporary resolution of the boundary dispute between Ghana and Togo along the river Kolpelig at Pulmakom in the Pusiga District.

An agreement has also been reached with the Boundary Commission of Burkina Faso to engage further in resolving all identified boundary disputes at Paga and Sapeliga in the Kassena West and Bawku West districts respectively.

In 2020, Togo was reported to have trespassed its boundary at the Kolpelig river, a tributary to the White Volta, claiming ownership of parts of Gareke, a suburb of Pulmakom.