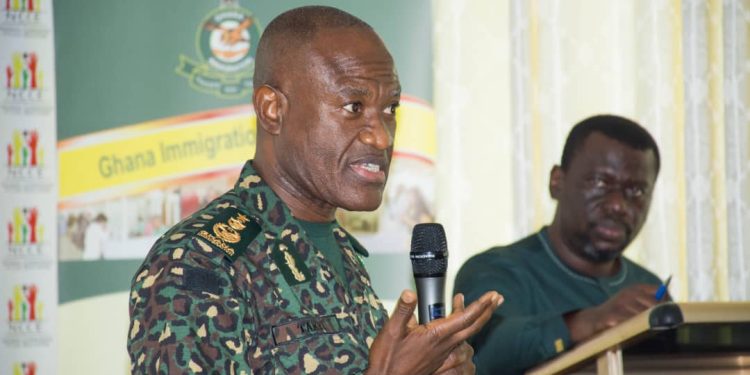 The Comptroller-General of Immigration, Mr Kwame Asuah Takyi explaining a point during the dialogue session

The Comptroller-General of Immigration has lauded the National Commission for Civic Education (NCCE) for leading the conversation on the review of the 4th Republican Constitution.

The Immigration boss affirmed this at the Constitution Week event of the NCCE which was organised for Officers of the Ghana Immigration Service (GIS) last Monday on the theme “Three Decades of Constitutional Rule; Revisiting the Agenda for Reforms”.

According to the Comptroller-General, an astute lawyer, an unexamined Constitution was not worth having; and calls for review of certain areas of the Constitution were in the right direction. He encouraged officers at the event to share their thoughts on the longest surviving Constitution of the country.

Speaking at the event, a Commission Member of the NCCE, Mr. Victor Brobbey said the Constitution is a national document that embodies the spirit and ideals of the nation and thus requires national consultation in drafting or amendment. “This explains our decision to consult Officers and other Ghanaians on the extent of constitutional reform necessary for the 1992 Constitution”, he explained.

The Commission Member made a case for “a more deliberate, systematic and inclusive effort which will lead to better reflection of what the populace really wants as provided by the Constitution in chapter 25.”

He insisted that broad public and political consensus through dialogue was fundamental to all forms of constitutional reform; hence the importance of the discussion.

By this, the Commission Member implored all participants to freely participate in the dialogue and suggest updates for the constitution.

During the dialogue, Deputy Comptroller-General of Immigration in charge of Command Post and Command Post (DCGI/OPS) Mr. Laud K. Affifah recommended some amendments regarding the National Security architecture of the country since the dynamics and importance of Immigration have drastically shifted from how it was 30 years ago.

Other proposals were made by Officers and appropriately noted or discussed in the engagement session, which was led by Commission Member of NCCE, Victor K. Brobbey. Themes in the recommendations cut across balance of powers of the Arms of Government, the appointment of officials, and more equitable remunerations.