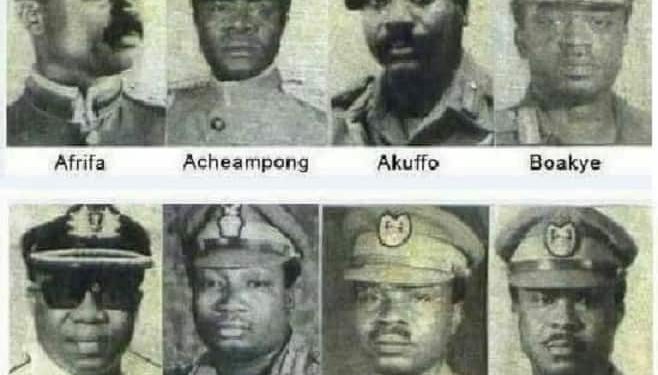 Today, June 26th 2022 marks exactly 43 years after the AFRC junta led by former President Jerry John Rawlings, may his soul rest in peace lined up and shot innocent Generals on baseless and cooked up charges. The Armed Forces Revolutionary Council took over the reins of power  from June 4, 1979, to September 24, 1979.

The regime came with the aim of stopping corruption. They accused their predecessors of economic sabotage, abuse of power, amassing of wealth and the misuse of state funds.

The second to be executed was former Head of State General Okatakyie Amankwa Afrifa, who led this country between 1968-1969 was cowardly dragged from his farm in Mampong and executed.

Thirdly, General FWK Akuffo, Head of State between 1978-79 who was a soft spoken and elegant soldier, sought refuge in the house of the Archbishop of Accra but was dragged and executed.

Another elegant soldier who did not miss the lens of Rawlings was General Robert Kotei, Deputy Head of State and Chief of Defence Staff. He had earlier resigned from the regime left for London and only returned for the coup to happen on the 4th of June thereby becoming a casualty.

Air Vice Marshall Yaw Boakye, the Air Force commander, a gentleman par excellence was also killed even though he aided Jerry John Rawlings to pass his exam to become a Flight Lieutenant. J.J himself referred to him as godfather at a point in time.

Perhaps the youngest of the army chiefs cruelly killed by the Rawlings led junta was 38-year-old Colonel Roger Felli, a Commissioner for Foreign Affairs and a right hand man of General Acheampong. He was in his hometown in Navorongo in the Upper East Region when the coup happened.

He had the chance to cross the border to Burkina Faso, but he declined on the basis that he was innocent.

He came to Accra and handed himself in only to fall into the hands of the Kangaroo Court of the AFRC.
Sad to say that, ten days earlier (16th June, 1979), General Kutu Acheampong a former Military Head of State (1972-78) and General Utuka had been executed by the bloodthirsty AFRC bandits.

Rawlings’ allies in the wake of the killings defended the action of the AFRC.

Kwasi Adu, who served on the Housing subcommittee of the Confiscated Assets Committee of the AFRC said  “There was a moral outrage and at that time it was considered that there was too much corruption [Kalabule] then [but] if you compare it to today, the offenses in those days are nothing,” Rawlings himself had also justified the killings of the General. At one of his June 4th commemoration in the Volta Region, Rawlings said

‘’We had no choice. We thought let two go. Acheampong and a certain Utuka, very corrupt Generals. They were sacrificed. It was not enough. Ladies and gentlemen, 10 days later, we had to sacrifice another six and some of the Commanders were innocent good people but it had to be done because the rage in the country was too high, too much’’.

As if these killings were not enough Rawlings who saw himself as an angel and a saint at the same time ordered more killings.

On the 4th of June 1979, General Odartey Wellington, the then Army Commander had been gunned down on the streets of Nima, a suburb of Accra.

Colonel Emmanuel Enningful who was a Lawyer and Commander of the Support Services and Chairman of the Military Tribunal had been executed with his wife at their home, in front of their children. How terrible can this be?
Some of the children of these Generals who were executed have taken on Rawlings publicly. The Children of General Utuka in a statement years ago expressed anger at Rawings.
‘

’We the children of the late Major General (Rtd) Edward Kwaku Utuka have felt the need to keep a dignified silence about the ranting of Jerry John Rawlings regarding our late father and other senior military officers.

Over the years, Rawlings has spoken and acted with impunity. While he enjoyed due process by trial through a Military Tribunal after instigating a mutiny on 15th May 1979, he denied our father that right’’ they lamented.

‘’If one were to apply Rawlings’ logic of probity, accountability and social justice, several Ghanaian politicians, Rawlings included, would be executed without trial’’.

Sometimes it’s just unbelievable to have elements of the AFRC and their decedents hail this bloodshed of the regime describing it as one of the best things that ever happened to Ghana. Posterity will judge us all.