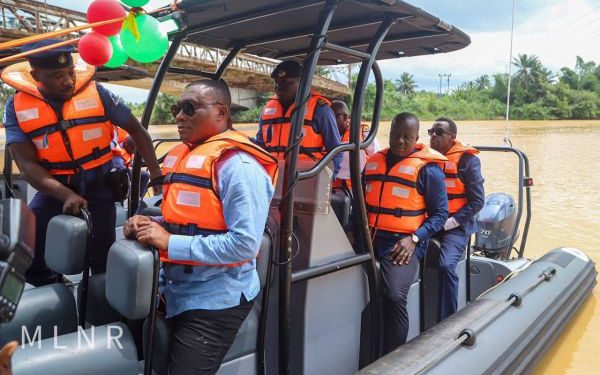 The government says it is hopeful that the introduction of the speed patrol boats on galamsey-affected water bodies will yield the needed results.

In a bid to curb the activities of illegal miners on water bodies, government has commissioned five-speed boats.

The move is also to take the fight against galamsey to river bodies across the country.

Speaking to journalists after the commissioning of the boats, the sector minister, Samuel Abu Jinapor, expressed optimism, adding that the move will be a game changer in Ghana’s quest to win the war on illegal mining.

“Most of the rivers in our country stretch a great distance, and it is almost impossible for anyone to monitor these enclaves to ensure that, we rid them of illegal small-scale miners. With the acquisition of these boats and the recruitment of these guards, it means that the major rivers in our country are going to be monitored constantly and is going to be a major intervention in clearing the river bodies of our country.”

Samuel Jinapor also said the government will recruit over 200 river guards who will collaborate with the Ghana Navy to man these rivers.

“The river guards are being recruited, and they will be deployed in the coming days. The work they are going to do will be under the supervision of the Ghana Navy. The Navy is going to train the guards to ensure that they are on the rivers 24/7 and this is going to have a lot of impact.”

The deployment was made at Beposo in the Western Region.

The 6.5 meters Rigid-Hulled Inflatable Boats are expected to be commissioned on major rivers including Ankobra, Pram, Brim and Black Volta to check illegal small-scale mining and the pollution of these water bodies.

“The Government of President Akufo-Addo is not against small-scale mining. What we are against, is any form of mining that pays no regard to the environment, that is done contrary to law and the established protocols, that threatens the lives and livelihoods of millions of our citizens, and we will not hesitate in cracking the whip on those who engage in such illegalities,” the Minister said.