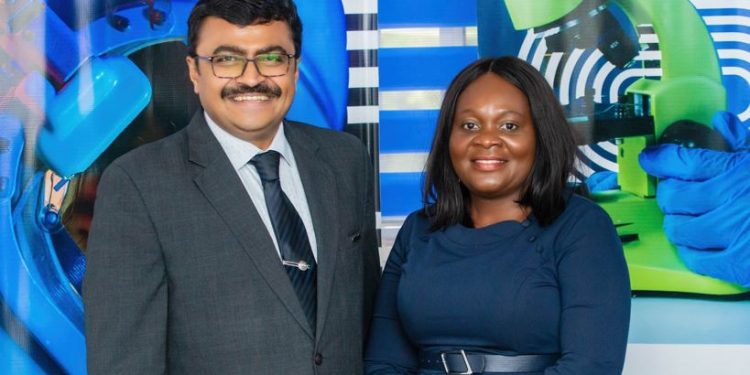 In a bid to fight banking sector fraud and boost security in Ghana, a one-stop full-service IT company, CWG Ghana, has joined forces with a leading banking enterprise financial crime risk management firm, Clari5 to make this possible.

The partnership has been in place for the past two years.

Speaking to the media after a recent stakeholder engagement meeting with both firms, Managing Director at CWG Ghana and Vice-President for its Group’s regional operations, Harriet Attram Yartey, said, financial sector anti-fraud mechanisms must be timely and take into context the peculiar circumstances of whatever jurisdiction in which they are deployed.

She also highlighted that the broader industry is moving in the right direction, but says significant lapses remain.

“The industry had been characterised by monitoring systems which had a time lag and allowed criminals to cart away with their loot before they were detected. Recent developments have shown that real-time monitoring is essential to effectively combat financial sector crime,” she explained in an interaction with the media during a formal visit by managers of Clari5.

Financial sector fraud has come into sharp focus following the release of the 2021 Bank of Ghana (BoG) industry fraud report, which showed that despite a 12 percent drop in attempts by cybercriminals to breach systems in 2021 – from a record high in 2020 – the success rate of the attacks had increased.

This, Mrs. Yartey says, will persist with advancements in technology and as criminals continue to evolve, finding new ways to steal from banks and their customers. Only timely and context-sensitive solutions will remedy the situation, she added.

Describing it as the Okraa (Akan word for the soul), Founder and Chief Executive Officer at Clari5, Rivi Varghese, on his part, argued that financial institutions must advance beyond collecting rudimentary Know Your Customer (KYC) data to properly understand the customer.

He added that this would enable the institutions to detect anomalies and nip attacks in the bud.

“There is something specific for Ghana, as such when you try to introduce technology, it must take into consideration the local context, and what behavioural patterns are like. The way we fight fraud is to understand the country’s context, and also how the customers of certain institutions behave. When we use technologies, we must take individual uniqueness into focus,” he noted.

With the pandemic-accelerated shift toward enhanced digital services, incidents of fraud have been on the rise. PwC, in its Global Economic Crime and Fraud Survey for 2022, showed that respondents reported total losses of US$42billion in addition to the damage to brand, reputation and market share.

Another report from fraud analysts, Juniper Research, predicts that online payment fraud, for example, will reach a cumulative US$206billion by 2025, which is 12 percent of the entire Gross Domestic Product (GDP) of Africa in 2021.

Mr. Varghese warned that failure to address incidents of fraud would not only erode the trust of domestic customers of banks, but could also have implications for the wider economy through sanctions from anti-money laundering watchdogs. “The industry is built on trust, and if that should fall, there would be repercussions for the wider economy,” he remarked.

The European Union (EU), in 2020, added Ghana to its list of high-risk jurisdictions with strategic deficiencies in its Anti-Money Laundering and Counter-Terrorism Financing (AML/CFT) regimes after the latter was placed on the Grey List of the Financial Action Task Force (FATF). The country only exited the list in 2022 after strengthening its AML/CFT regime.

The Clari5 CEO also predicted that the widespread integration of the Ghana Card will translate into a wider fintech boom over the next two years, with a flurry of payment and settlement platforms expected to lead the pack. “These payments and systems will flourish in the country and among other things, drive transaction costs down,” he added.