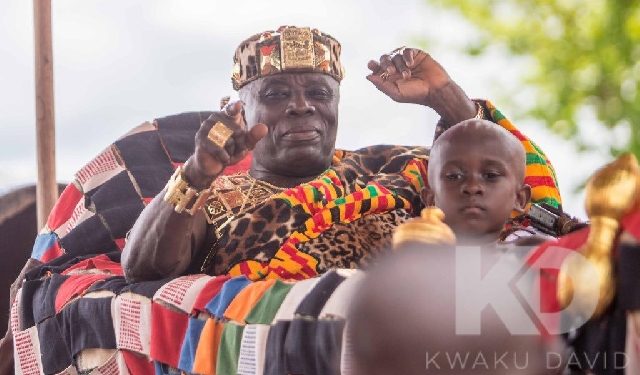 In an interview on Eyewitness News, Dan Ofori-Atta, the State Secretary for the Akyem Abuakwa State said Okyehene gave the ruling after residents of the Asamang Tamfoe community lodged a complaint with the Kyibi Traditional Area of the invasion of the forest in the area which was found to have been facilitated by the Benkumhene.

State Secretary Ofori-Atta said the Traditional Council summoned and confronted the Chief of Asamang Tamfoe Osabarima Kwame Koh II and the Benkumhene Nana Kwame Darkwa, and they pleaded with Okyehene to help them fight the menace because they lacked the needed logistics to do so, only to realize the Benkumhene was neck-deep in the destruction.

He continued to explain that the plea of the Asamang Tamfoe chief and his Benkumhene was taken in good faith and an anti-galamsey taskforce was dispatched to the area and an excavator was seized, and a confrontation ensued only for the Benkumhene to surprisingly organize a press conference challenging the authority of the taskforce.

“And Osagyefuo has stated clearly that any chief found culpable in galamsey operations has himself to blame, so straight away, there was the pouring of libation and slaughtering of sheep to symbolize his [the Benkumehene’s] official destoolment as a chief.”

But speaking to Umaru Sanda Amadu on the Point Blank segment on Eyewitness News, Benkumhene Nana Kwame Darkwa said: “I have not been destooled. It is false propaganda by the State Secretary and the Okyehene himself. I didn’t swear an oath to the Okyehene, I swore an oath to Osabarima Kwame Koh II, so until my chief says he doesn’t need me, I am still a chief.”

Benkumhene Nana Kwame Darkwa explained that Okyehene breached the traditional protocols, forgoing the Asamang Tamfoe chief to destool him and that until the Asamang Chief destools him, he will continue to perform the duties of a Benkumhene of the area.

“I do consider myself a substantive Benkumhene of Asamang Tamfoe. Tradition must be respected and so if my chief [Asamang Tamfoe Osabarima Kwame Koh II] removes me, I will respect his decision and comply accordingly, and I will never challenge him.”

“I am not a galamseyer and I have never engaged myself in galamsey activities, and he [Okyehene]  knows. He invited me to speak on galamsey siphoning the community’s money and when I got there, he threw the allegation of me organizing a press conference but refused to touch on the basis of the press conference which is the indiscriminate shooting in the town by his taskforce,” Nana Kwame Darkwa continued to absolve himself of the accusations.