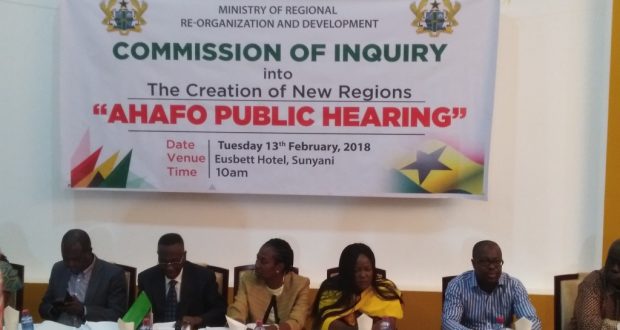 The Commission of Inquiry collating the views and justifications for splitting the Brong Ahafo Region has begun public hearings for the creation of the Ahafo Region.

The commission concluded its hearing for proponents of the proposed Bono East on Monday and has started soliciting the views of residents on the proposed creation of the Ahafo Region.

The hearings are expected to end on Saturday, February 17, 2018, with consultations expected to take place in Goaso, Sankore, Hwidiem and Bechem. The Commission, on Tuesday, held the first phase of the public hearing for proponents of the Ahafo Region in Sunyani with hundreds of residents, students, members of the general public, Municipal and District Chief Executives (MDCEs), chiefs and opinion leaders from Ahafo areas in attendance.

Some persons could be seen observing the process through by the windows and standing in the corridors of the venue to show support and catch a glimpse of the proceedings.

Presenting a strong case for the creation of the region, the Omanhene of Yamfo and President of the Ahafo Council of Chiefs, Nana Ansah Adu Baah II, said the split will lead to efficiency in administration and enhance the socio-economic development of the area.

He argued that the Ahafo area was endowed with natural resources and was capable of managing its resources for development.

He added that as a people, the creation of the Ahafo region will create job opportunities and open up the areas for development for the generations yet unborn.

“We have gold in Yamfo, Ntotroso and Kenyasi and have therefore resolved to use our royalties from the gold to support the creation of the region since it is demand-driven and we are determined to liberate ourselves,” he stated. He lamented the poor road network in the area which he claimed was robbing farmers of their investments and therefore impoverishing them.

“In Ahafo here, food is abundant but our roads are not good. We cannot transport the foodstuffs to the bigger towns and market centres. It’s the same with health services. We do not have standard hospitals and in some areas no clinic at all. In fact, it’s sad to see pregnant women being transported on bicycles and motorbikes to the health facilities. We have been sidelined for long and it’s time we take our destiny into our hands”, he charged.

Nana Yaw Ansah Adu-Baah II, appealed to the Commission to recommend the creation of Ahafo Region to the President in their report and assured it of the residents’ resolve to unanimously endorse the creation of the region at the referendum.

The Omanhene of the Goaso Traditional Area, Nana Kwasi Bosomprah I, commended the President for initiating processes of creating the region and bringing development to the doorsteps of the people of the area in line with his promises. He assured the Commission of the full support of the traditional council to the process, saying, the creation of the Ahafo region out of the existing Brong Ahafo Region would speed up development in all areas.

“I want to assure you that we ready for the region and do make a case for us to the President to consider us for the creation of the region. As I welcome you, I know you will visit other communities and see how we are marginalized. So the Ahafo region is a must,” he appealed.

The Chairman of the Commission, Justice Stephen Alan Brobbey, assured residents and the chiefs that their views would be taken into consideration when making their recommendations because the whole process is demand-driven and has been triggered by the petitioners from the four regions.

He said all constitutional process for the creation of regions will be applied, and cautioned the petitioners and residents to avoid the use of insults and insinuations in their campaign.