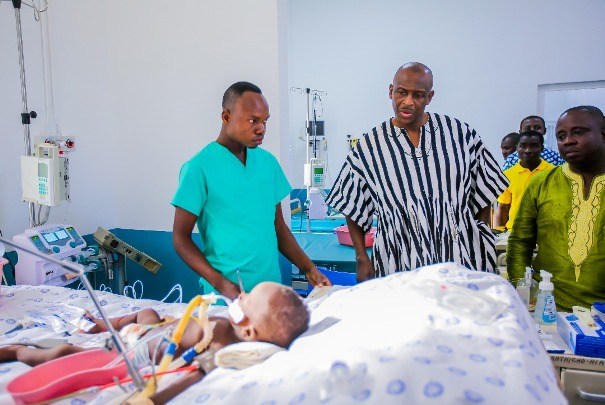 The May 9 Foundation, a philanthropic organization that champions the memory and welfare of national disaster victims, as well as the needy and poor in Ghana, has marked the 17th anniversary of the Accra stadium disaster with a humanitarian project to save sick children at the pediatric intensive care unit of the Komfo-Anokye Teaching Hospital (KATH) in Kumasi.

The stadium disaster on May 9, 2001, claimed the lives of 126 Ghanaian football fans at the Accra Sports Stadium during a football game between rival clubs Accra Hearts of Oak and Kumasi Asante Kotoko FC.

Championing the memory of these perished souls for the last 17 years, is a philanthropic organization led by former Asante Kotoko Chairman and Philanthropist, Mr. Herbert Mensah, who has used several charity activities including donations to families of victims, prayers and donations at the central Mosque in Kumasi for the departed souls, football gala games with cash prizes between various local community teams, as well as remembrance street walks to remind Ghanaians of the tragic day which should never be allowed to repeat itself.

This year, the two-day May 9 remembrance events started with prayers at the Kumasi central Mosque for the departed souls of all those who have perished during national disasters.

100 bags of cement was donated in response to a request from the Imams for the renovation of the Mosque as well as cash, food items and toiletries to the chiefs and clerics.

With focus on helping sick and dying children in dire need of medical surgeries at the Komfo Anokye Teaching Hospital’s pediatric intensive care unit, Mr. Herbert Mensah and other members of the May 9 Foundation proceeded to visit the sick children at the pediatric intensive care unit at KATH, many of whom suffer from conditions caused by the accidental ingestion of caustic soda, a soap making raw material that has resulted in the destruction of the food pipe in their throats.

According to Dr. John A. Appiah, Head of the Pediatric Intensive Care Unit of the KATH, children who suffer this condition can only eat or drink through a plastic tube inserted into their stomachs until a medical surgery is carried out to repair the damage in the throat.

“This condition has become prevalent in our unit here in recent years and many children from all over the country are brought here for treatment because it is the only pediatric intensive care unit in the country, but the cost of carrying out the surgeries are high and many parents cannot afford to pay”, Dr. John A. Appiah said whiles welcoming the May 9 Foundation team to the KATH.

He revealed that, it cost close to GHC20,000 to carry out a surgery to repair the food pipe of one single child, but since many of the parents cannot afford the high cost of treatment, most of the children are left eating through plastic tubes inserted into their stomachs for several years until someone or an organization comes to their rescue.

The President of the May 9 Foundation, Mr. Herbert Mensah, whose attention was brought to the dire situation at the unit by some medical personnel at the KATH expressed sincere worry about the alarming rate at which the condition is affecting many children especially when it is through the carelessness of the parents and not any fault of the affected children.

Mr. Mensah, who is also President of Ghana Rugby Football Union, said he was moved to take action through the May 9 Foundation after he received a petition, and the organization located children suffering from such conditions from Asangragwa in the Western region as well as from Wa in the Upper West region to undergo life-saving surgeries at the KATH.

“My friends and myself who are involved with May 9 we try to help. Every year we are involved in something else. May 9 is something we do every year for seventeen years. We received a petition this year from some people in the medical field about this incredible problem of caustic soda ingestion among little children in the unit here. And so we got involved to try and help, bring about change, and secondly highlight the problem for others to get involved in bringing about change.”

“We like to touch the people directly to be sure that the help we give reach the people. Everyone can try to help in their own little way according to their conscience. It is all about the little contributions from individuals. It is not about having big money before you can help though these surgeries are expensive”.

The President of GRFU added that, “I acknowledge and thank the sponsors of the project including the media for massively highlighting the problems of the sick children, Sunda international for providing toiletries and detergents for the sick children in the hospital, Conservaria Ghana Ltd. for providing food stuffs, Interplast, Kwabena Kese of Kesben, Ransford Antwi of SunCity and all the sponsors both in cash and kind donations to the ‘Save a Sick Child Project’ of the May 9 foundation”.

The May 9, 2018, events climaxed with an awareness walk through some streets of Kumasi last Saturday with numerous patrons from both Accra and Kumasi including Rockson Ahmed Cort, who is a victim of the Atomic gas explosion in Accra and Alex Korankye, whose wife died during the June 3, 2015 Accra circle flooding with a surviving baby on top of her.

In a speech to climax the yearly memorial events after the long awareness walk in Kumasi, Mr. Herbert Mensah thanked the people for coming out massively in their numbers to participate in memory of all those perished souls.

He also acknowledged the organizers especially King Edward, Yusif Mustapha, Kwame Gapson, Prince, Sacut Amenga-Etego and many others for their diverse contributions to the humanitarian project to save sick children.

He called on other Ghanaians with the means especially the middle class to support the initiative to save children from dying needlessly.

The ‘Save a Sick Child Project’ is an ongoing, all year-round sustainable project that seeks to restore the health of sick children whose parents are unable to personally afford the high cost of treatment specifically targeting victims of accidental ingestion of caustic soda at the pediatric intensive care unit of the Komfo Anokye Teaching Hospital (KATH) in Kumasi.