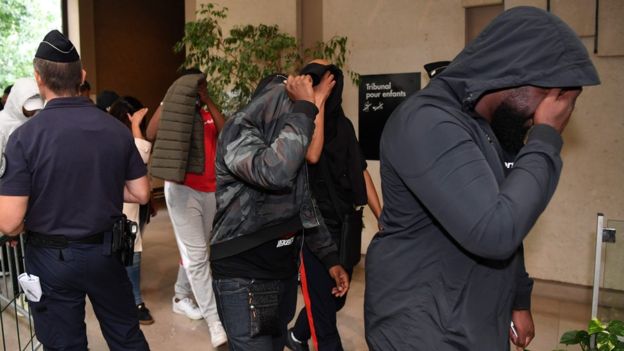 Two French rappers who were involved in a public brawl in an airport have been handed 18-month suspended sentences.

Booba and Kaaris were arrested in August after a fight erupted in the terminal of Orly airport, footage of which was widely shared online.

The pair are established rivals, and were arrested along with members of their respective entourages.

A French court ordered both men to pay a €50,000 fine on top of their suspended sentences.

Nine other defendants were handed sentences of up to 12 months each.

The fight erupted on 1 August when Booba – whose real identity is 41-year-old Elie Yaffa – met his rival Kaaris, née Okou Gnakouri, 38, in the terminal. Both rappers were on their way to Barcelona – and ended up in the same part of the airport.

The two men had previously collaborated with one another, but had fallen out in recent years, leading to a heated rivalry that mostly played out online.

Passengers in the crowded terminal recorded the ensuing brawl between the shelves of a duty free shop, which temporarily closed part of the airport and caused delays for hundreds of travellers.

Video footage shot on mobile phones shows punches being thrown alongside bottles of perfume from the shelves of the shop.

Both men spent about three weeks in prison, before being released on bail of €30,000.

Prosecutors tried to establish who was responsible for starting the brawl, and concluded that Booba had probably aimed the first kick – but he told the court he did so in self-defence after being surrounded by Kaaris and his entourage.

Kaaris likewise claimed he had acted in self-defence.

In the end, prosecutors decided both men were to blame, and asked for a one-year suspended sentence for each, but the judge handed down a harsher 18 months.

The court was told that both rappers had cultivated aggressive public personas – something common in the rap scene – and could not back down from a potential confrontation while saving face.

“Under the gaze of passengers and social media, this encounter could only end in physical confrontation,” the prosecutor said.

Neither rapper was in the courtroom for sentencing. But the incident is not quite behind them yet.

Damage caused to the Orly airport shop is estimated to have cost in the region of €50,000 – something which will be considered separately by the courts in January.

Menzgold is not a Ponzi scheme – PRO