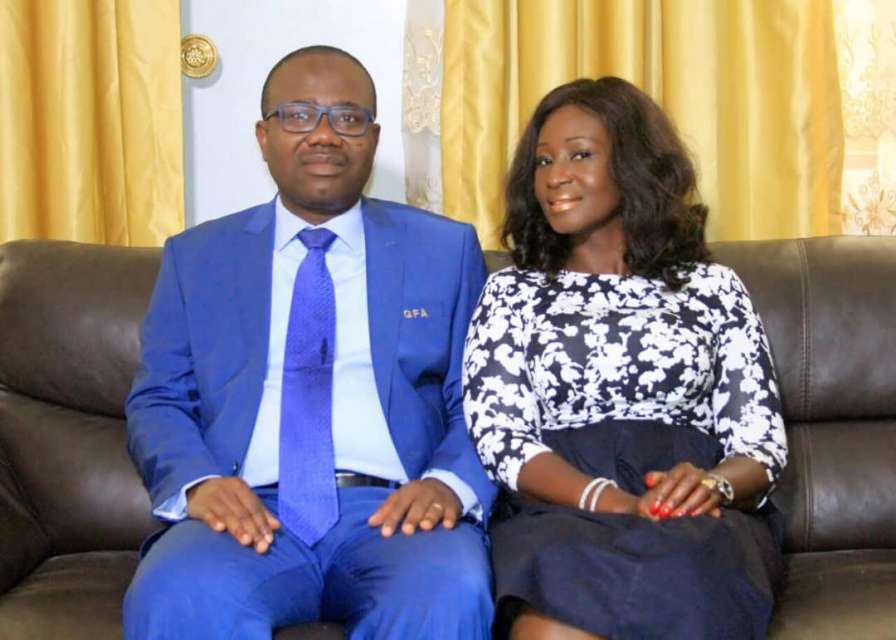 Christine-Marie Nyantakyi, wife of Mr. Kwesi Nyantakyi, former President of the Ghana Football Association (GFA), who’s serving a life ban by Fifa, has in her first public comment on her husband’s fall from grace to grass, pleaded with Ghanaians to be patient with him; saying he’s not running away from the country.

Speaking on Metro TV’s Good Evening Ghana on Tuesday, she explained that her husband has only been sanctioned by Fifa for breaking its code of ethics, and that there are no criminal findings against him.

Mr. Nyantakyi has been banned from all football activities for the rest of his life, and has been fined 500,000 Swiss Francs (equivalent of Ghc2,414,276.46 and $497,490.00 respectively), for various breaches of FIFA’s code of ethics after he was exposed by investigative journalist, Anas Aremeyaw Anas.

Mr. Nyantakyi himself has described the punishment as “harsh and unfair”, and has served notice he will be appealing the decision; a position his wife strongly agrees with.

“Fifa is an association and it’s governed by a code of ethics; so if you break the code of ethics; you’re sanctioned; so whatever has happened; it’s a sanction; it’s not a criminal finding. People are saying Fifa has banned him so what’s Ghana doing. We’re talking about two different things here. To prove that somebody has committed a crime, you need to go through some processes. And the law says that a person is presumed to be innocent until proven otherwise” she noted.

“My pain is that Ghanaians should exercise patience. Kwesi is not running away; he’s here. If the court or if the processes find Kwesi guilty, he’s available to face the consequences. But until then, the name-calling, the insults, the jubilation and the celebrations that he’s down, I am begging and pleading that we should all hold our horses and wait. Time will tell; he’s ready to face any consequences. He says if I have done something wrong; let the law take its course. If he’s found innocent we give glory to God; so we are ready for any consequences.” 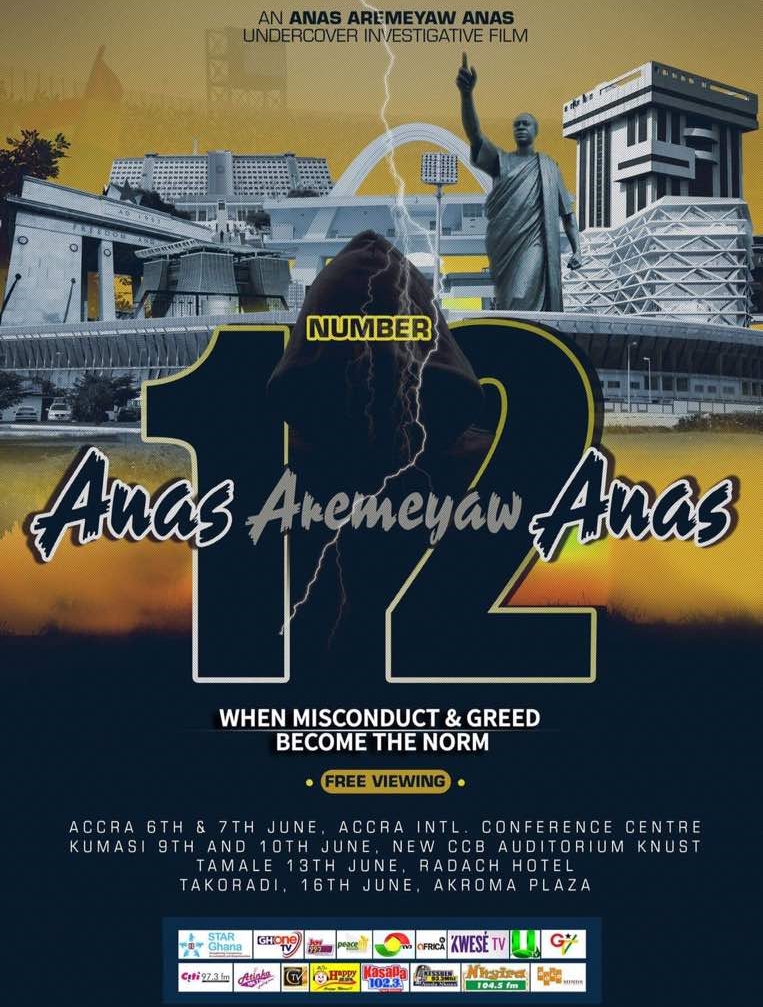 My husband made mistakes; but helped Ghana football

Mrs. Christine-Marie Nyantakyi, who’s the Director of Oasis Montessori School at Teshie Greda Estates, said inasmuch as her husband had made mistakes as a fallible human being, he contributed significantly to put Ghana on the world map through football.

“But it’s so painful to see a man who has served Ghana football; I am not saying whatever he did was right; I am not here to say he’s right or wrong. What I am saying is that, this is a man who has spent thirteen years of his life serving Ghana football. He made some mistakes. The Akans say that, the one who goes fetching water breaks the pot. What does that mean? It means that once you’re making an effort to perform an activity, there’s a possibility that you will slip and you will break the pot. So in doing his work, he has made a mistake; fine; but there are rules, regulations, processes or procedures to find him guilty or not guilty. Why can’t we all wait for that thing to be done; than for people to try him in public; and say all sorts of things as if he’s committed murder or a treasonable offence?”

“Kwesi represents Africa; he represents Ghana at Fifa and at CAF. He put Ghana on the world map. Do you know that hitherto, people thought Ghana was Guyana? So at least, people got to know that there’s a country in West Africa called Ghana, and Guyana is in South America” she noted.

Some Ghanaians have been calling on the government to prosecute Mr. Nyantakyi following the outcome of Fifa’s investigations.

A Deputy Minister of Information, Pius Hadzide, recently revealed that the Criminal Investigations Department (CID), has completed its investigations into alleged crimes committed by Mr. Nyantakyi, and will soon present a docket to the Attorney General for advice and possible prosecution.

Fifa sent my husband over a 1,000-page document

Mrs. Nyantakyi believes the Fifa investigative process that ended in the life ban was unfair, as her husband wasn’t in Zurich physically to be questioned.

“My husband didn’t travel to Zurich. He was contacted. Over 1,000 pages of documents were sent to him to respond. He couldn’t go because his passport was even recently released to him so he didn’t go there. It was through correspondence. Fifa sent a letter to inform him of the ban. He was shocked, sad and disappointed. He was not expecting this kind of punishment. We’re waiting for the briefings so he can appeal” she noted.

Although the incident has taken a huge toll on them especially their two daughters, aged 13 and 9; she said they’re coping by the help of God.

“Yes; it’s been tough for us, but we’ve been able to hold on by the grace of God. I remember the following day after the so-called announcement came about him being arrested or however they put it; I went to pick my last girl from school, and she run to me and said mummy, someone asked me that; Twumuwaa, do you know your father is going to jail? Mummy; is it true daddy is going to jail? So she started crying; and I hugged her and told her daddy is not going to jail.”

“…And even just last week Thursday, she said during break time, somebody pushed her, and she asked why are you pushing me? And then the person said do you know that your father is in trouble? So they’ve gone through a lot, but I am so grateful to Dr. Mary Eshun, the Principal of GIS; she called me together with the counsellor and they offered support. They said they’re there to protect the children so that nobody will use it against them. So for about three or four days; they didn’t go to school.”

She said her husband is pained because he does not understand why such a thing would be done to him and for what purpose.

“His worry and the bother is what the motive was; so he tried to find out from people why did they do that? The motive for somebody planning, plotting, strategizing and executing this just to make sure he’s disgraced. So that has been his pain and worry; he doesn’t mind at all whatever has happened; he has taken that in good faith, but each day he keeps asking what have I done wrong? If they wanted me out they could have found another way; but that scheming to that extent”.

Mr. Nyantakyi was first handed a 90-day provisional ban in June 2018, after the showing of a video and audio evidence of allegations of corruption levelled against him by investigative journalist, Anas Aremeyaw Anas, in his piece titled, Number 12.

The suspension was further extended by another ninety days in September 2018, before the announcement of the lifetime ban on Tuesday.

The piece captured Kwesi Nyantakyi in a compromised position. He was filmed supposedly taking $65,000 (£48,000) from an undercover reporter pretending to be a businessman.

The video among other things captured top officials of the football association including its President, Nyantakyi taking bribes to influence the invitation of players to the national team, influencing the duration of playing time offered to some players and influencing the selection of unfit players and referees to participate in games.

Following the first screening of the video, many called for a complete dissolution of the Ghana Football Association (GFA) and immediate resignation of its embattled president, Kwesi Nyantakyi.

Kwesi Nyantakyi, who was also the first Vice President of the Confederation of African Football (CAF) eventually resigned from all football-related positions few days after the video was aired.

Then the suspension from Fifa followed.

At a point, he was investigated by the Criminal Investigations Department of the Ghana Police Service after President Akufo-Addo filed a complaint when he watched excerpts of Anas’ video, in which the former FA President was using his name to lure foreign investors.

Following the eventual halt of football activities in Ghana after the corruption exposé, the government of Ghana attempted to dissolve the FA using the courts, but faced stiff opposition from members of the FA.

Eventually, government and the FA came to an agreement to allow Fifa, to mediate in the matter. Fifa in the end, set up a Normalization Committee for the country in September 2018, which has been given a period of six months to sort out the issues and restore Ghana football to normalcy.

What becomes of Nyantakyi’s suits against Anas? 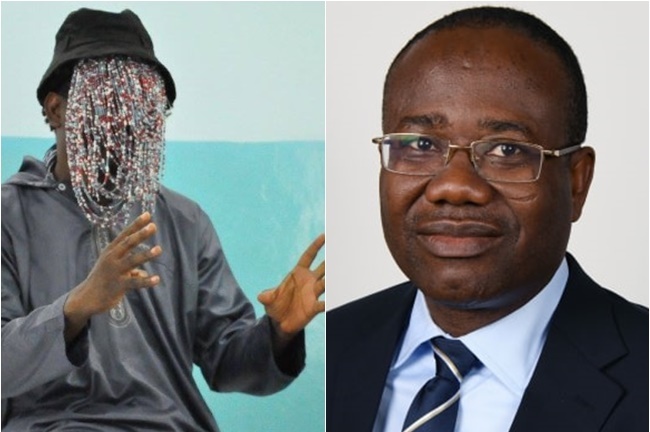 In the latter part of September 2018, Mr. Kwesi Nyantakyi sued undercover investigative journalist, Anas Aremeyaw Anas. That suit was the second time Mr. Nyantakyi was suing Anas and his Tigereye PI firm. The earlier suit also at a High Court was specifically about defamation.

He wants the court to also declare that the recordings violated his “right to dignity” because he wasn’t consulted before the piece was premiered, and thus prayed the High Court to award damages against Anas and his Tigereye PI firm for the said violations.

It is now unclear what becomes of Mr. Nyantakyi’s suits, considering the turn of events.