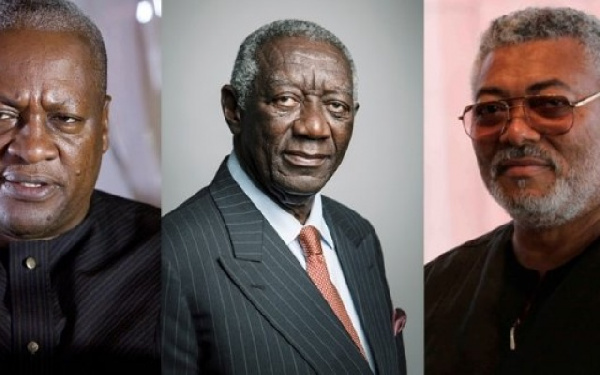 A lawyer and governance analyst, Dr. Eric Oduro Osae, has said that the country’s constitution in its current form, cannot be said to be against former presidents who have served two terms already from putting themselves up again to be elected.

In his view, the likes of John Agyekum Kufuor and Jerry John Rawlings can indeed contest the presidency again if they so wish.

H[contextly_sidebar id=”FDywDnPeCoGFXfTEz3tROjRSKUXdbhmT”]He also said the immediate past president, John Dramani Mahama, who left office after serving just one term, is also eligible to serve two 4-year terms, contrary to popular understanding from the constitution that each President has a maximum of two 4-year terms.

Speaking on the Citi Breakfast Show on Tuesday, Dr. Oduro Osae explained that John Mahama’s exit from office in 2016 nullifies his first term because the constitution suggests that a president is barred from contesting the high office after completing two straight 4-year terms.

“My understanding of Article 66 clause 2 of the constitution is that you will be able to serve two straight terms. One term is 4 years, so President Mahama served his first four-year term. Had he not left, President Mahama could have gone for another term. With that, Article 66 clause 2 would debar him from contesting again but because of the break, it gives him an opportunity to start another term. Assuming that he comes 2020 and he wins the election, he is starting a first term and if he continues and goes in again for 2024, he can go in for another term. What it means is that his first term has been written off,” he said.

“I also think that by the provision under Article 66 clause 2, it does not debar any of our former presidents from putting themselves up again to be elected as president after they have exhausted their first two terms,” he added.

Article 66 of the 1992 Constitution indicates that;

(1) A person elected as President shall, subject to clause (3) of this article, hold office for a term of four years beginning from the date on which he is sworn in as President.

(2) A person shall not be elected to hold office as President of Ghana for
more than two terms.

Dr. Oduro Osae believes that the dictates of the constitution give room for the past leaders to return to power and enjoy an 8-year maximum term.

On the ability of Kufuor and Rawlings to re-contest for presidency in future, he said in an earlier interview that, “And it is not in the Constitution that after serving two terms, you cannot contest again so people were suggesting for interpretation from the Supreme Court if former Presidents Kufuor and Rawlings can come back to contest. [This is] because the Constitution says you cannot go for more than two terms, but [it] does not debar a President who has served his two terms of office from contesting in any future date.”

Former President John Mahama has already exhibited interest in contesting to lead the NDC into the 2020 elections, which will allow him to serve a 4-year term.

Dr. Oduro Osae’s claim may inspire the former president to seek clarity in court on the matter to see if he could possibly be eligible to extend the new 4-year term by another term should he contest and win the 2020 elections.

11 Indians, 2 Ghanaians ‘stranded’ in vessel detained in Ghana since 2017