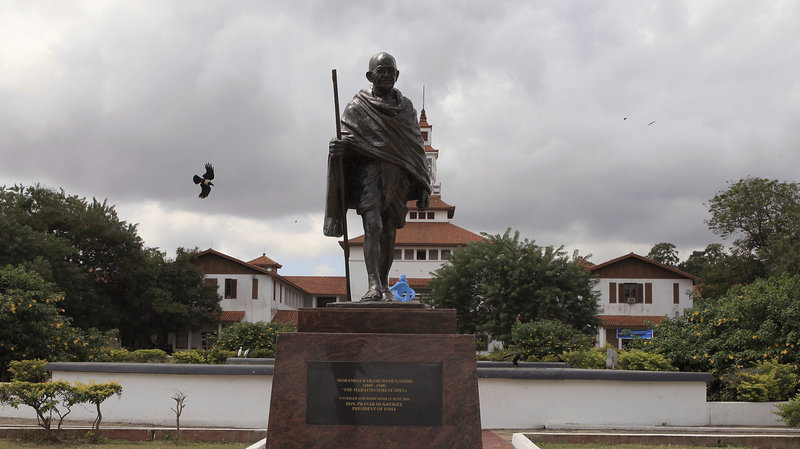 The controversial Mahatma Gandhi statue, which was forced off the University of Ghana campus after debate and protest, has found a new home.

Ghana’s Foreign Affairs Ministry will continue today, Wednesday relocate the statue of India’s independence hero to the Ghana-India Kofi Annan Centre of Excellence in ICT at Ridge in Accra.

[contextly_sidebar id=”wMj9jFgd88vPzEso36xcO891PJztb0WX”]A short ceremony will be held at the centre on Wednesday in collaboration with the High Commission of India.

The statue of Mahatma Gandhi was removed from the Univesity of Ghana campus in December 2018 after two years of agitation by students and lecturers.

Lecturers of the university started soliciting signatures for a petition for its removal after it was unveiled in 2016 by India’s former President Pranab Mukherjee.

The petition held that the Gandhi statue was a racist symbol and that African heroes should be put first.

“The University of Ghana seeks to be a world-class university. At world-class universities, even former bastions of slavery, apartheid and white supremacy, statues and other symbols associated with controversial persons have been pulled down or removed,” the petition said.

At the time, Ghana’s former High Commissioner to India and now Speaker of Parliament, Professor Mike Ocquaye, described demands for the removal of the statue as unnecessary.

He was concerned with the implications of the protests on diplomatic ties between Ghana and India.

“It will be most unnecessary, most uncalled for and not in the supreme interest of Ghanaians and we must know what serves our interest best. Some people in India wanted diplomatic relations to be broken in Ghana over the way we sometime back spited them, but caution prevailed and they kept their cool to show that they understand diplomacy and the ups and downs of international relations and today the relationship is a bit better and we look forward to it being better still.”

He also called for more tolerance of divergent views, saying that is the hallmark of academia.

But Vice Chairman of Parliament’s Foreign Affairs Committee, Kwaku Ampratwum Sarpong, ruled out a possible diplomatic row saying the erection of the statue was conducted at the lower levels of diplomacy, and would not disrupt Ghana-India relations.

Mahatma Gandhi is normally known for leading non-violent resistance to British colonial rule in India ahead of the country’s independence on August 15, 1947.

But before then, when he worked in South Africa, he is cited as having made racist comments about black Africans.

In his early writings, he referred to black South Africans with the racist slur “kaffirs”.

The lecturers’ petition highlighted a number of these racist comments like when he said in 1894: “A general belief seems to prevail in the Colony that the Indians are little better, if at all, than savages or the Natives of Africa. Even the children are taught to believe in that manner, with the result that the Indian is being dragged down to the position of a raw Kaffir.”