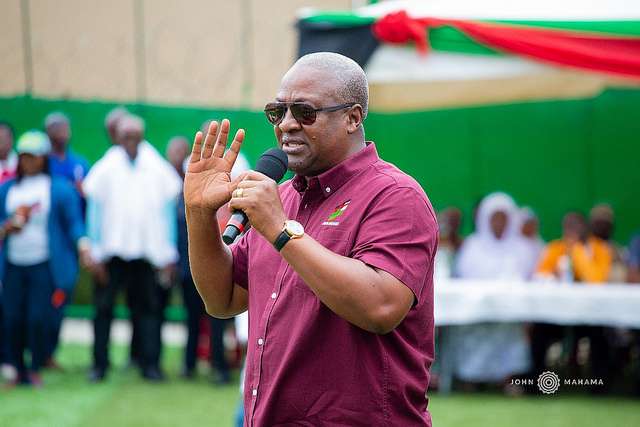 Former President John Dramani Mahama has sounded a word of caution to the governing New Patriotic Party (NPP) advising them to desist from attacking members of the opposition National Democratic (NDC) else they’d be forced to show their true colours.

According to him, they will match the NPP boot for boot in the 2020 general elections if the NPP continues to intimidate NDC members with hoodlums and vigilante groups.

“We are not going to joke in 2020 and I’m sounding a warning to the NPP – we are going to match them boot for boot,” he said in reaction to the alleged attack on NDC members during the by-election in the Ayawaso West Wuogon constituency on Thursday.

John Mahama gave the warning from the Adaklu Constituency where he met with NDC supporters and delegates as part of his campaign tour of the Volta Region.

The NDC pulled out of the election earlier on Thursday following pockets of violence recorded in parts of the constituency during the by-election.

NDC withdrew from the poll few hours after voting began on Thursday, with the claim that some of their agents and members were being assaulted by some persons believed to by sympathizers of the governing NPP.

The leadership of the party subsequently ordered its polling agents and observers to leave the polling centres.

“In the circumstances, I have conferred with the parliamentary candidate and the leadership of the NDC. We have no option than to withdraw from the ongoing exercise,” the National Chairman of the NDC, Samuel Ofosu Ampofo, added.

While speaking to the NDC supporters, Mr. Mahama said the fact that they have been docile in the wake of unprovoked attacks by NPP vigilante groups does not mean they are powerless.

He said they have adopted such nature because they respect the constitution and the rule of law.

“I want to sound a caution that NDC has a revolutionary root and when it comes to unleashing violence no one can beat us to that. It is just that we midwifed this country’s democracy and that is why we must be the first to respect it. That is why we are acting as a party that is docile and respecting the rule of law. But if we believe that the government cannot protect our people and we believe that the government is using its vigilante groups and illegal forces to intimidate and harass and injure our people, then we may have to advise ourselves,” he added.